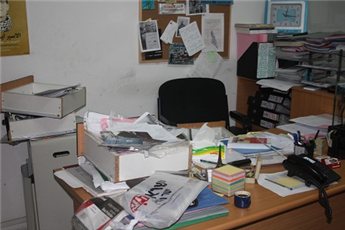 Dozens of Israeli soldiers invaded, on Tuesday at dawn, the central West Bank city of Ramallah, broke into and searched several nongovernmental institutions, including the office of the Palestinian Women’s Union, and confiscated several computers; damage was reported.The Maan News Agency reported that the army broke into the Women’s Union in Qaddoura refugee camp, the office of the Ad-Dameer Prisoners Support and Human Rights Association, and the headquarters of the Palestinian Non-Governmental Organizations Network (PNGO), and violently searched them.

The soldiers also confiscated several computers, laptops and documents that belong to the attacked NGO’s.
The agency added that clashes were reported in the refugee camp as dozens of local youths hurled stones at the invading soldiers who fired gas bombs and rubber-coated metal bullets.

Palestinian Legislator, Secretary-General of the Palestinian National Initiative, Dr. Mustafa Barghouthi, slammed the Israeli violation, and described the attack as act on piracy.

Dr. Barghouthi added that the Israeli occupation is escalating its assaults against the Palestinian people, and their civil society institutions.

He further stated that attacking organizations that serve the Palestinian community is a violation that should be denounced by the international community and human rights groups, and added that Israel must be held accountable for its violations and crimes, and must face international sanctions.