Report: “Obama Will Let Netanyahu Face International Isolation On His Own” 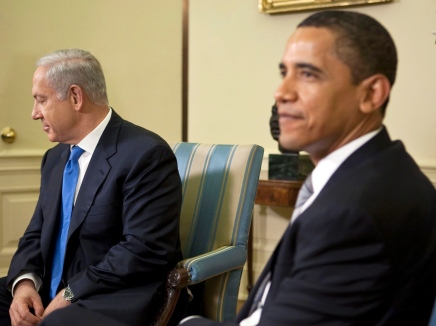 A recent report published in the Newsweek by Peter Beinart, who is described as a “Jewish liberal at the American-Jewish community in the United States’, also close to the Obama Administration, stated that Barack Obama will not help Netanyahu in overcoming international pressure against his policies with the Palestinians.Beinart said that, by facing the International Community on his own, Netanyahu will feel the heat of isolation, and might change his policies, mainly the ongoing construction and expansion of illegal settlements in the occupied West Bank, and in occupied East Jerusalem.

The new U.S approach that Obama likely to initiate in dealing with Netanyahu was described as “benign neglect”.

Beinart says that Obama, serving his second and final term in office, will not be directly confronting Netanyahu “and will “stand back and allow the world, especially the European Union, to exert pressure on Netanyahu”, Israeli daily, Haaretz, reported.

The Obama Administration will not be appointing what was described as “big name” Middle East Envoy, and will not be presenting a peace plan with the Palestinians because it knows that Netanyahu wants to avoid international isolation by conducting fruitless and extended peace talks, similar to talks he held with the Palestinians before, without changing his policies, therefore, “Obama decided not to help Netanyahu, hoping that he will eventually realize that he must change his policies”.

But the new approach does not mean a halt of U.S military and financial support to Israel, and the United States will continue to finance the Israeli Iron Dome anti-missile system, and will also act against any Palestinian move that is meant to file lawsuits against Israel at the International Criminal Court for crimes committed against the Palestinian people.

The U.S. will also continue to act in order to prevent the Palestinian Authority in the West Bank from collapsing in order to prevent any deterioration of the security situation, and will act on preventing the resistance in Gaza from firing shells into Israel.

The plan will also block geographical contiguity between the northern and southern parts of the occupied West Bank, and will fragment that already fragmented West Bank due to illegal settlements and the illegal Annexation Wall.

The paper said that a European Diplomat in Brussels stated that this issue will be discussed by EU Ministers, who also intend to discuss certain sanctions on the import of products made in Israeli settlements.

Several EU Ministers are also asking for effective measures against Israel’s settlement activities but are facing strong objection from some major EU countries, topped by Germany.

The European Union is expected to renew its call on Israel to halt its settlement activities in occupied Palestine, and to present initiatives that indicate that Tel Aviv is really committed to the political process with the Palestinians.