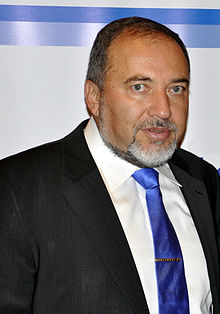 Israeli Foreign Minister of the far right ‘Israel Our Home” Party, Avigdor Lieberman, had to submit his resignation Friday after facing an indictment of fraud and breach of trust, and said that he will also resign from his post as vice Prime Minister despite claiming that he “committed no crime”.Lieberman said that he will try to end the whole issue, and clear that indictments against him before the general Israeli elections that are scheduled to be held on January 22, 2013.

His resignation came via email after consulting with his defense attorney who said that he will clear the breach of trust and fraud charges. Lieberman, according to his lawyer, intends to run in the upcoming Israeli elections.

The Global News Service of the Jewish People reported that the “indictment is for advancing the position of former ambassador to Belarus for fraud and breach of trust Ze’ev Ben Aryeh’s position in the Foreign Ministry allegedly in exchange for information about an investigation against Lieberman being conducted in Belarus. Last spring, Ben Aryeh confessed that he had received and passed documents to Lieberman in 2008”.

Lieberman said in his statements that he is resigning due to the fact that he believes that the Israelis in the country are entitled to head to the ballots after the whole issue has been settled, and that “he will continue to serve Israel and its citizens” , the news service reported.

Furthermore, Israeli Ynet News, reported that Lieberman will not be stepping down from his membership in the new Halikud Beitreinu merger between his party and the Likud Party of Benjamin Netanyahu. He will also remain in his post as the head of the Yisrael Beiteinu (Israel Our Home) party.

Netanyahu’s office also issued a statement Friday saying that the Prime Minister spoke to Lieberman and wished that he will be able to prove his innocence very soon so that he can take a senior cabinet position in the upcoming Israeli government.

Israeli leftist parties demanded the resignation of Lieberman who promised, several years ago, that he will be resigning from his post “the moment he faces an indictment”.