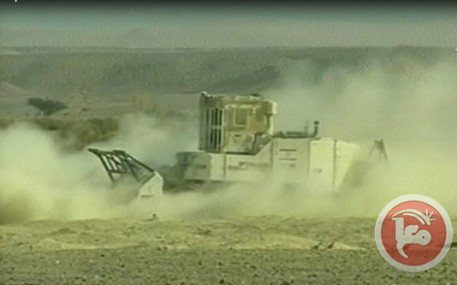 Israel has officially started the removal of landmines close to the border with Jordan to use the lands for illegal settlement construction in the area, especially in the Wadi Araba area. The plan also includes boosting industry and factories in settlements in the area.Israeli sources reported that thousands of Dunams extending from the occupied Golan Heights and Majdal Shams reaching the Dead Sea have been implanted with landmines in 1948 in order to “prevent Arabs and Palestinians fighters from entering Palestine”.

Israel wants to ensure that the Palestinians never have access to the Jordan Valley, and especially the border area with Jordan.

Israeli landmine sweepers and military engineers will be working, and double checking, to ensure all mines are removed in the designated areas so that the constructions can start. Some of the lands will also be used by settlers for agricultural purposes.

The Maan News Agency quoted Palestinian sources stating that Israel realizes now that there is no need for landmines as missiles can cross borders and hit their targets, adding that the Israeli plan “is meant at provoking the Palestinian Authority and Jordan”, in addition to “conducting provocative settlement projects in the Jordan Valley area to control lands and water resources”.

It is worth mentioning that, earlier in September this year, Israel started the removal of nearly 700 landmines from the Jordan valley area, while the Israeli Jerusalem Post reported that “mines, some even 40 years old, will be neutralized through controlled explosions to reduce the number of minefields”.

Back then, Israel said that the mines became nonoperational, and not needed, but can still pose danger to travelers.

The Jordan Valley area is an essential part of the occupied West Bank, known as the Fruit Basket of Palestine, but has been closed off by Israel and isolated from the rest of the occupied territories, leading to millions of dollars in losses to the Palestinian farmers.

Israel has also been targeting the fertile area for its illegal settlement construction and expansion activities, and also for what it dubs as “military considerations”.