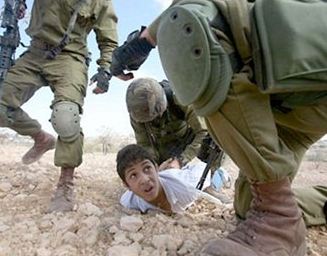 It said that %95 of the kidnapped children were attacked, beaten and abused during their arrest, and added that most of the children were kidnapped from their homes between the hours of 2 and 4 at dawn, and that the army violently broke into their homes by smashing through the doors, and caused damage to the furniture and property during violent searches.

The children were cuffed and blindfolded, and the soldiers violently attacked and insulted their parents who attempted to defend them and prevent their arrest. The soldiers then kidnapped the children taking them to unknown destinations without any warrants.

“Most of the kidnapped children were tortured and abused during their arrest; soldiers would beat and kick them with their weapons and boots, and sometimes with batons, this is happening besides the insults and the curses, in many cases the soldiers fired rounds of live ammunition, gas bombs and concussion grenades”, the Ministry said.

The detained children were also beaten while being transported to detention and interrogation centers, the soldiers would punch and kick them, would also force them to sit on the floor of the military jeeps and would place their legs on their faces and heads.

In many cases, soldiers driving those jeeps and trucks would speed up and then step on the breaks, an issue that pushes the kidnapped children around those jeeps causing their bodies and heads to smash around.
When the kidnapped children are taken to interrogation centers, they are tortured and threatened to be continuously and endlessly tortured “unless they confess and provide some names of friends and relatives”.

In many cases, Israeli interrogators would subject the kidnapped children to rounds and rounds of interrogation while keeping them sitting on small chairs and their hands would be tied behind their backs and their legs would be shackled; the children would also be blindfolded, and would also be forced to stand against the wall for several hours, outside, under the rain and extreme summer sun.

The Ministry also reported that Israeli interrogators repeatedly used electric shocks while interrogating the detainees, and would force them to drink boiled water similar to what they did with Nassar Aref Jaradat, 16, from Sair town near the southern West Bank city of Hebron.

Nassar was kidnapped on February 2, 2010, and was taken to the Etzion military camp where he was forced to stand under the cold and the rain for several hours, and was repeatedly beaten and punched, and when he was taken to the interrogation room, the interrogators shocked him with electric currents until he lost consciousness.

Most of the kidnapped children were taken to interrogation centers in illegal Israeli settlements such as Keryat Arba’, Maaleh Adumim, Dan Shomron, and several other settlements where the detainees were interrogated and tortured and the Red Cross was never informed about their whereabouts.

There are 140 Palestinian children who are currently under interrogation or awaiting trial, and a total of 200 who are held by Israel, including 32 who are under the age of 16.

Similar to detained adults, Palestinian children held by Israel are deprived from their basic and internationally guaranteed rights; their families and lawyers are not granted any information about the location where they are held and in most cases the reason behind their arrest.

Israel continuously violates all related international laws and treaties, especially regarding the protection of children, and continues to kidnap, torture and imprison Palestinian children, in addition to the fact that most of the casualties in Israel’s repeated wars on Gaza are civilians, mainly children and infants.

Israel also treats the kidnapped Palestinian children as “terrorist to be” and uses all illegal measures and sorts of torture and abuse against them, including sleep deprivation, extreme torture, depriving them from family and lawyer visits, food and water deprivation, sexual harassment and tries to recruit them to work for the Israeli security by telling them that the torture would stop once they start to cooperate.

It is worth mentioning that Israel also applied a military law known as Military Order #132 that allows the army to kidnap and interrogate Palestinian children who are 12 years old.