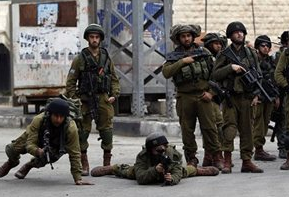 Israeli soldiers kidnapped, Friday, a Palestinian police officer who allegedly punched an Israeli soldier, in the center of Hebron, as the army was chasing and firing at Palestinian youths who clashed with them in the occupied city.Israeli daily, Maariv, reported that the army kidnapped Firas Abu Aziza, 27, at a roadblock that was installed by the soldiers near Hebron.

Maariv said that the army attempted to kidnap Abu Aziza twice, and failed at both times, adding that the first time the army wanted to kidnap him was after he punched a soldier and prevented the army from firing at local youths and chasing them.

Also, local sources reported that more than 250 Palestinians rushed to the scene and started hurling stones at the soldiers who attempted to kidnap Abu Aziza, and the army retreated.

The Israeli army said that the arrest of Abu Aziza came after extensive surveillance, and detailed planning, as he became “wanted” after punching a soldier.

A Palestinian security officer in Hebron reported that the Palestinian police initially arrested the officer fearing for his life as the army was after him, but released him later on.

The Israeli army claims that Abu Aziza “obstructed the conduct” of the Israeli soldiers who chased Palestinian youths who hurled stones at them, and went on to punch one of them, an issue, according to the army, that “caused an escalation” especially when 250 Palestinians rushed to help him.