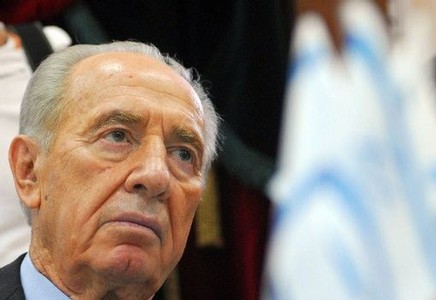 Israeli President, Shimon Peres, stated Sunday that Israel has a partner in the “peace process”, and that this partner is Palestinian President, Mahmoud Abbas; Peres warned that the lack of an agreement with the Palestinians “threatens the Zionist project”, and the “Jewish nature of Israel”.Israeli “Jerusalem Post” reported that the statements of Peres came in front of 160 Israeli diplomats. The Israeli president said that the entire region is undergoing a transitional era, adding that “it is impossible for Israel to impact the Arab world while practically every Arab state is going through a sort of struggle”.

He also stated that he does not approve of the opinion of Prime Minister, Benjamin Netanyahu, who says that there is no Palestinian partner for peace, and added that he (Peres) have known Mahmoud Abbas for more than 30 years, and is convinced that Abbas is the only leader that Israel can reach a peace agreement with.

Peres acknowledged that what Abbas did on the international level, by heading to the United Nations, and obtaining recognition of Palestine as a nonmember state at the UN General Assembly, and that what Abbas says to the international community is not illegal, and added that “Abbas is the only Arab leader who openly stated that he wants peace, and opposes terrorism”.

The Israeli president also said that Abbas “showed courage in preventing terrorism, even when his position posed a threat to his life.”

According to the Jerusalem Post, Peres asked the Israeli ambassadors to place themselves in the shoes of Abbas and see if they can do what he did by forfeiting his right to return to his hometown, Safad, which became part of the state of Israel.

Peres claimed that the Israelis want peace, but not all of them believe that this peace can be achieved, and added that he is convinced that once the Palestinian issue is resolved, Israel will be able to play a more important role in the Middle East.