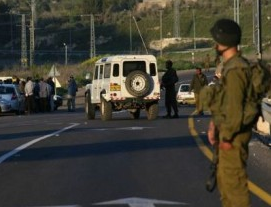 The settler was treated by Israeli field medics as his injury was mild and did not require further treatment. Israeli soldiers conducted a search campaign in the area; no arrests were reported.

Furthermore, one soldier was mildly injured in his leg during clashes with local residents in Nabi Saleh village, near the central West Bank city of Ramallah.

Local sources reported that the army carried out several invasions into the village on Friday and Saturday.

Similar to nearby villages, the villagers hold weekly nonviolent protests against the illegal Israeli Annexation Wall, and Israel’s illegal settlements; Israeli and international peace activists participate in the protests that are met with excessive use of force by the army.