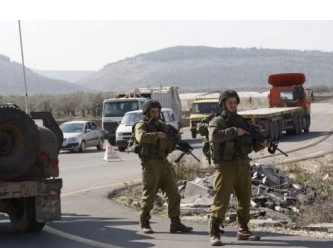 Israeli media sources reported, Saturday evening, that the army kidnapped two Palestinian young men at a roadblock near the northern West Bank city of Nablus, and claimed they carried weapons, grenades and knives.The sources said that the two are from a Palestinian village, south of Nablus, and that they also hurled a number of Molotov cocktails at Israeli military vehicles, and monitoring towers, the Palestine News Network (PNN) reported.

The army said that the soldiers ambushed the two and managed to arrest them, and that the two carried several Molotov cocktails, grenades, guns and knives.

The army further claimed that the two carried out several attacks against the army, and planned future attacks; the two are currently held under interrogation.