Three Children Sentenced To 4 Months Each 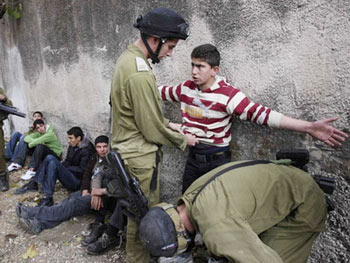 The Palestinian Detainees Studies Center reported that the Israeli Salem military court sentenced three Palestinian children from Azzoun town near the northern West Bank city of Qalqilia, to four months imprisonment each.The court also delayed deliberations in the case of another child from Jenin, and released his brother.

Lawyer Mustafa Azmouti told the Center that that Salem court sentenced Qais Waddah Shbeita, 16, Mohammad Adel Shbeita, 16, and Mohammad Abdul-Fattah Radwan, 15, to four months each. They were all kidnapped after the army broke into their homes in Azzoun on December 7, and are currently held at the Majeddo prison.

In related news, the Salem court postponed deliberations in the case of a detained child identified as Ihsaan Ayman Aabed, 14, until December 30 after ordering a psychological assessment, but refused to release him.

The court released his brother Osama, 13, after ordering his family to pay a NIS 3000 fine.

The two brothers were kidnapped by the army, on December 13, while in their family’s orchard, close to the Annexation Wall.

Furthermore, the court extended the remand of Palestinian Security Officer, Hamed Salim Badwan, 32, until January 10, 2013. Badwan, also from Azzoun, is currently held captive at the Megiddo prison; he was kidnapped by the army on December 17.

The court also decided to delay deliberations in the case of detainee Bahaa’ Mahmoud Marshoud, from the northern West Bank city of Nablus, to “grant the prosecution more time to prepare an indictment”. He is currently being held at the Al-Jalama interrogation facility.

Furthermore, the court ordered the release of Fadi Mohammad Abu Samra, 24, from Serees village, near Jenin, and ordered him to pay a 600 NIS fine; he was kidnapped by the army on November 2, 2012.

There are currently more than 140 Palestinian children who are currently under interrogation or awaiting trial, and a total of 200 who are held by Israel, including 32 who are under the age of 16.

Israel is currently holding captive at least 4600 Palestinians, including 200 children and 11 women, in addition to 1200 detainees who are ill, including 20 who are continuously held at prison clinics.

The ill detainees who suffering from different diseases and health conditions, including cancer, and are not receiving the adequate and specialized medical care they require.

20 of them are continuously staying at the Ramla Prison Clinic that lacks specialists, basic equipment and supplies, 18 detainees suffer from cancer, liver failure, or heart conditions, and 85 detainees who suffer from physical or mental conditions.