Army To Demolish Structures Near Nablus 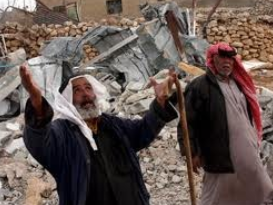 Tuesday February 5; Israeli soldiers invaded Sabastia town, northwest of the northern West Bank city of Nablus, and handed several residents military orders demanding them to demolish structures built in their town and property.Nahedh Riziq, one of the residents who was handed a demolish order for his two-story building, stated that the army and employees of the “Construction and Planning Committee, invaded the town and handed him an order demanding him to demolish his restaurant under the pretext that it was built without a construction permit.

He added that, 15 years ago, he received a similar order targeting the same property, and filed an appeal at an Israeli court, but never heard from the court or the army until the soldiers handed him the new order today.

Riziq stated that the army wants to control large areas of Palestinian lands in the area as it has archeological sites that attract tourists, including sites attended by Jewish worshipers or tourists.

The soldiers also handed similar orders to several residents, including an order against a two-story home that belongs to a resident of the village.

Army informed the residents that they have three days to demolish their own property; otherwise the soldiers will demolish the properties and bill the owners.

According to data collected by the Israeli Committee Against Home Demolitions (ICAHD) and was published a few months ago, Israel’s demolition of Palestinian homes is a systematic policy that aims at forcing the Palestinians to leave Jerusalem in order to maintain a Jewish majority.

ICAHD estimates that Israel demolished at least 24.145 homes in the West Bank, East Jerusalem and the Gaza Strip since 1967.