26 Palestinians Kidnapped Since Monday At Dawn 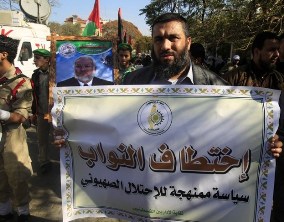 The Ahrar Center for Detainees’ Studies and Human Rights reported that Israeli soldiers kidnapped on Monday and Tuesday 26 Palestinians in different parts of the occupied West Bank. Legislators and Hamas leaders are among the kidnapped.The Ahrar center said that the army kidnapped, on Tuesday at dawn, Zaher Mousa, a former political prisoner who was previously exiled by Israel, from the Zawata village, near the northern West Bank city of Nablus. The soldiers also kidnapped Dirar Hamadna, from Aseera Al-Shamaliyya village near Nablus.

Former political prisoner, head of the Ahrar Center, Fuad Al-Khoffash, stated that the army is deliberately targeting Hamas elected officials and legislators in the occupied West Bank in a move that is meant to disrupt national reconciliation and unity.

Al-Khuffash said that, starting on Monday at dawn, Israeli soldiers escalated their arrest campaign against the Palestinians in the West Bank, and kidnapped 26 persons, including Jerusalem legislator who was exiled by Israel to Ramallah, Ahmad Attoun, Hebron district legislators Hatem Qfeisha and Mohammad Ismail At-Till, and two senior Hamas political officials from Nablus identified as Adnan Asfour and Bilal Baker.

Al-Khuffash said that some of the residents who were kidnapped by the army on Monday and Tuesday have been identified as, former political prisoner Fadi Al-Amour from Tulkarem, Samir Bheiss from Yatta near Hebron, Baha’ Yaish from Nablus, Mohsin Al-Hardan from Qalqilia, Ma’moun Zawahra from Bethlehem, Zein Ed-Deen Shabana from Hebron, Wael Issa Obeiyyat from Bethlehem, Mohammad Sabah from Teqoa’ near Bethlehem, Basel Dweikat from Beta town, Jihad and Nidal Salah Badawi, Mjally Zoheir Issa, Qaher Moammar, Shaker Mousa, Dirar Hamadna and Zaher Mousa from Qaryout town.

The latest invasions and arrests in the West Bank are considered a serious escalation of attacks against the Palestinians and their property in different parts of the occupied West Bank.

Several Hamas officials, political leaders and human rights advocates slammed the latest violations, and called on the International Community to intervene and oblige Israel to end its violations.

Also on Tuesday, medical sources in Nablus said that a Palestinian child, who fell into a coma after being rammed by a settler’s vehicle, died of his injuries.