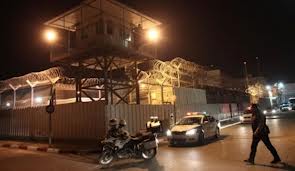 The Ahrar Center for Detainees Studies and Human Rights reported Monday that tension is mounting at the Eshil Israeli detention center after Israeli soldiers broke into the detainees’ rooms and informed them that many of their “privileges” will be taken away from them in the coming 10 days.Fuad Al-Khoffash, head of the Ahrar Center, reported that the prison Warden, known as Shoham, decided to strip the detainees of many privileges they achieved during repeated hunger strikes, including denying them access to a room where they place their clothes and belongings, in addition to denying the aging and ailing detainees the right to an extended “break” in the prison yard.

All detainees will be given less time in the prison yard. The detainees said that they reject the Israeli violations and provocative measures against them.

Detainee Mohammad Sabha, member of the Higher Leadership Committee in Israeli prisons, told the Ahrar Center that the detainees told the warden that they reject his decision, and are willing to escalate their protests should the prison administration insist on stripping them of their rights that they achieved after repeated extended hunger strikes in different Israeli prisons.

Al-Khoffash said that the detainees in Gilboa’ are planning several protest activities including returning meals, filing a complaint at Israeli courts, and are willing to conduct acts of civil disobedience.

Al- Khoffash voiced an appeal to international human rights groups to intervene and act on stopping the ongoing illegal Israeli violations against the detainee and their internationally guaranteed rights.