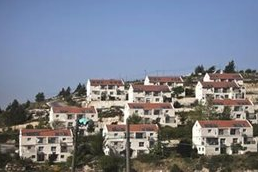 The Israeli government decided to build additional 90 units in the Bet El illegal settlement, east of the central West Bank city of Ramallah, as part of a prior agreement reached with the settlers 18 months ago.The decision to go ahead with the construction comes just before the anticipated visit of U.S. President, Barack Obama, to the region in an attempt to resume the stalled peace talks amidst talks of “a settlement construction freeze”.

Israeli TV, Channel 10, reported that Israel approved the 90 units, granting the construction official permits, as part of the agreement reach with the settlers 18 months ago in exchange for the removal of the Ulpana illegal settlement outpost near the central West Bank city of Ramallah.

The Israeli government promised to build 300 units in return for the removal of a few homes built by the settlers on private Palestinian property, The new construction will start in the coming few weeks.

Meanwhile, the New York Times reported that the Israeli government of Benjamin Netanyahu “is willing to conduct a partial freeze on settlement activities” should the Palestinian Authority refrain from heading to the International Criminal Court to sue Israel for its violations.

The Palestinian Authority now has access to the International Criminal Court, as well as many UN-run institutions, after it managed to obtain a non-member observer status at the United Nations.

Obama is scheduled to visit Israel, Palestine and Jordan in March; Israel claims that the American-Israeli talks will focus on “the Iranian nuclear file”, the situation in Syria, and the “efforts to resume peace talks with the Palestinians”.