Child Injured After Being Rammed By Settler’s Vehicle In Hebron 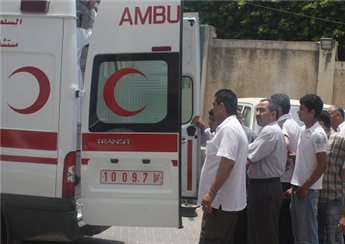 Monday February 11 – Palestinian medical sources in Hebron reported that a Palestinian child was injured after being rammed by a settler’s vehicle in the southern West Bank city of Hebron.The sources said that the child, Jamil Arafat Al-Fakhoury, 8, suffered mild injuries, and was moved to the Al-Ahli Hospital in the city.

On Sunday evening February 10, four Palestinians have been injured in a traffic accident with a settler south of the southern West Bank city of Hebron.

Coordinator of the Popular Committee Against the Wall in Yatta town, Rateb Al-Jabour, told the WAFA news agency that the accident took place on the main road linking between Ath-Thaheriyya and As-Samoa’ towns, close to the Shima illegal settlement.

On Sunday, January 13, a Palestinian child, 7, was moderately injured after being hit by a car driven by an Israeli settler near the Kidar illegal settlement, in occupied East Jerusalem; the settler fled the scene.

Last October, a Palestinian child suffered moderate injuries after being rammed by a settler’s vehicle near the Ibrahimi Mosque in the city.

Last September, another child was seriously injured after being hit by a settlers’ vehicle as she was walking home from school in Tiqoua’ village, near the West Bank city of Bethlehem.

The child was identified as Hayat Mohammad Suleiman, 8 years old. She was walking back home from school on the main road that is also used by Israeli settlers living in illegal Israeli settlements in the area.

Last August, an Israeli settler driving in Jaber Neighborhood, in Hebron, hit a Palestinian child then drove away.

In January of last year, a settler hit a Palestinian teenager at a checkpoint near Jerusalem, and then drove off leaving the wounded teenager behind.

Several claims were filed with the Israeli police and the military in the occupied territories regarding hit and run ramming incidents carried out by Israeli settlers, but no actual measures were taken on the ground.