Soldiers Order To Bethlehem Villagers To Evict Their Lands 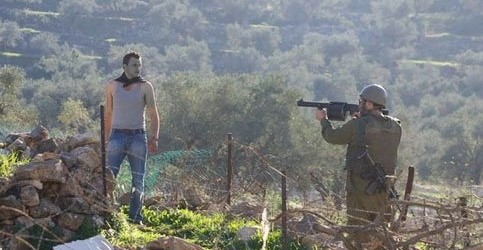 Monday Feb 18; Israeli soldiers handed two Palestinians from Nahhalin village, west of Bethlehem, military warrants ordering them to leave their own lands as the Israeli army intends to take the lands away under the claim of “military considerations”.Head of the Nahhalin Village Council, Jamal Najajra, told the Radio Bethlehem 2000, that the villagers found military orders placed on their lands in the areas of Ein Fares, Al-Kabbarat, Qornat Ad-Da’mas, Wadi Salem, near Beitar Elit, Daniel and Gahovut settlements.

The military orders instruct the residents that they are not allowed to enter these areas, not allowed to plow or plant them, and also informed them that the army also intends to illegally confiscate another 40-Dunam section that belong to the families of Fannoun, Zayed and Ghayata.

Najajra further stated that the violations do not stop here, as a number of extremist settlers living in a settlement in the Gush Ezion Settlement Bloc, flooded with waste-water, large areas of lands that belong to Nahhalin town, in Khallit Al-Dalia and Wadi Al-Mrabba.

He added that extremist settlers repeatedly flood Palestinian farmlands with wastewater to sabotage the ruin the plants in an attempt to cause the Palestinian farmers further destruction of lands, property in addition to huge financial losses.

This is beside that the fact that the waste-water they flood Palestinian farmlands with also causing sickness among the residents who will be trying to save their orchards, their main, and on many cases, the only source of livelihood.