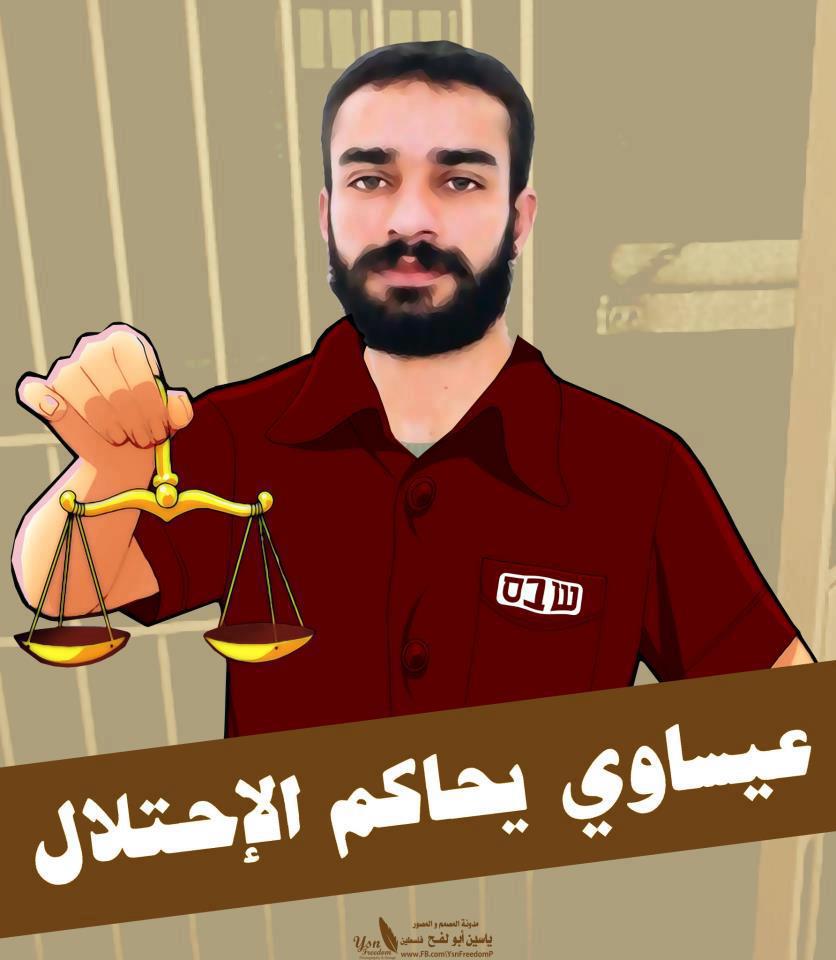 Letter from prisoner Samer Al-Isawi; as it came from the Ministry of prisoners: I turn with admiration to the masses of our heroic Palestinian people, to our Palestinian leadership, to all forces, parties and national institutions. I salute them for standing by our fight to defend our right to freedom and dignity.I draw my strength from my people, from all the free people in the world, from friends and the families of the prisoners who continue day and night chanting for freedom and an end to the occupation.

My health has deteriorated dramatically and I’m hung between life and death. My weak body is collapsing but still able to be patient and continue the confrontation. My message is that I will continue until the end, until the last drop of water in my body, until martyrdom. Martyrdom is an honor for me in this battle. My martyrdom is my remaining bomb in the confrontation with the tyrants and the jailers, in the face of the racist policy of the occupation that humiliates our people and exercises against us all means of oppression and repression.

I say to my people: I’m stronger than the occupation army and its racist laws. I, Samer al-Isawi, son of Jerusalem, send you my last will that, in case I fell as a martyr, you will carry my soul as a cry for all the prisoners, man and women, cry for freedom, emancipation and salvation from the nightmare of prisons and their harsh darkness.

My battle is not only for individual freedom. The battle waged by me and by my heroic colleagues, Tariq, Ayman and Ja’affar, is everyone’s battle, the battle of the Palestinian people against the occupation and its prisons. Our goal is to be free and sovereign in our liberated state and in our blessed Jerusalem.

The weak and strained beats of my heart derive their steadfastness from you, the great people. My eyes, which started to lose their sight, draws light from your solidarity and your support of me. My weak voice takes its strength from your voice that is louder than the warden’s voice and higher than the walls.

I’m one of your sons, among thousands of your sons who are prisoners, still languishing and steadfast in the prisons, waiting for an end to be brought to their plight, their pains and the suffering of their families.

The doctors told me I became exposed to stroke because of the disorder of my heartbeats, the shortage of sugar and the drop in blood pressure. My body is full of cold and I can’t sleep because of the continued pain. But despite the extreme fatigue and chronic headaches, as I move on my chair, I’m trying to summon all my resources to continue on the road till its end. There is no going back, only in my victory, because I’m the owner of Right and my detention is invalid and illegal.