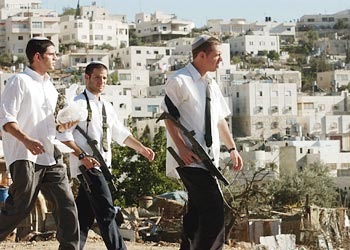 Thursday February 21; a group of armed extremist Israeli settlers invaded, shortly after midnight, the village of Qarsa, south of the northern West Bank city of Nablus, broke into several homes and torched six cars that belong to the residents, the Arabs48 News Website reported.Ghassan Doughlas, in charge of the Israeli settlements file at the Palestinian Authority in the northern part of the occupied West bank, stated that the settlers came from Yesh Kodesh illegal settlement, close to the village.

The settlers also broke into a number of homes in the village, an issue that led to clashes with the residents.

Local residents, members of a local village watch committee, confronted the settlers forcing them out of the village.

Later on, Israeli soldiers invaded the village and clashed with dozens of local youths, leading to nine injuries among the residents.

On Wednesday, a number of extremist Israeli settlers attacked Palestinian shepherds in Burin village, south of Nablus, and in Hebron, in the southern part of the West Bank.

The settlers also hurled stones at several Palestinian homes and residents, leading to clashes with the residents.

The attacks are part of ongoing escalating assaults carried out by extremist settlers against the residents, their homes and lands in different parts of the occupied West Bank, and in occupied East Jerusalem.