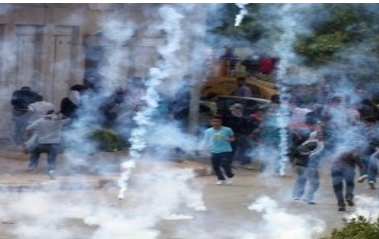 Thursday February 20; The Radio Bethlehem 2000 has reported that dozens of residents have been injured after Israeli soldiers attacked the weekly nonviolent protest demanding the army to reopen a main street it blockaded 12 years ago, in Hebron, in the southern part of the occupied West Bank.Protests are held on a weekly bases demanding the army to open the road that links Hebron city with the nearby towns of the Ar-Reehiyya, As-Samoa’, Ath-Thaheriyya, Doura, and the Al-Fawwar refugee camp.

The protesters marched towards the Bet Hagai illegal settlement, built on privately-owned Palestinian lands in the Al-Harayeq area, in the southern Hebron hills. Dozens of residents, Israeli and international peace activists participated in the protest.

Rateq Al-Jabour, coordinator of the Popular Committee against the Wall and Settlements, told the Radio Bethlehem 2000 that the protesters are demanding the army to reopen the road as it is a vital road that connects Hebron with its southern towns.

Al-Jabour added that the closure of this road, as well as all illegal Israeli roadblocks, violate the internationally-guaranteed right to the Freedom of Movement.

He also stated that the Palestinians will keep their nonviolent activities against the illegal Israeli measures, Israel’s illegal settlements and its Annexation Wall.

Al-Jabour further stated that dozens of Israeli soldiers and policemen were deployed in the area, and declared it a closed military zone before demanding the protesters to leave.

They fired gas bombs and rubber-coated metal bullets at the protesters and at the local journalists.

The road was blockaded by the Israeli army 12 years ago forcing nearly 150.000 Palestinians to take alternate, longer, unpaved routes in order to reach the nearby city of Hebron.