Egyptian Court Calls On Morsi To Close All Border Tunnels 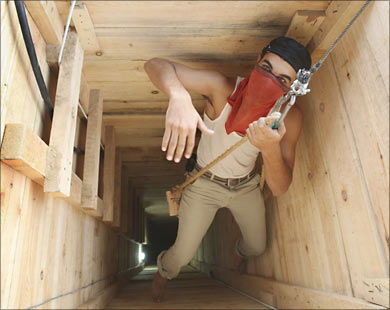 An Egyptian court ruled Tuesday that all border tunnels between the Gaza Strip and Egypt “must be closed and demolished, as they are draining the Egyptian economy and resources, in addition to the fact that some tunnels are used for smuggling weapons into Gaza”.The ruling was made amidst an ongoing Egyptian campaign that demolished dozens of tunnels, and flooded them with toxic waste-water since the beginning of the year.

An Egyptian lawyer who filed the lawsuit said that, since the Egyptian revolution started on January 25 2011, thousands of Palestinians crossed into Egypt via the border tunnels.

The lawyer said that the tunnels have drained the Egyptian resources and economy, as Egyptian products and goods are being illegally sent to Gaza.

He also said that weapons, fuel, stolen cars and food supplies are being smuggled into Gaza, an issue that is leading to negative impacts on the Egyptians in Sinai in particular, and in Egypt in general.

Furthermore, Egypt said that it has numerous security concerns regarding the tunnels, and added that some of the gunmen who, in August of last year, killed 16 Egyptian soldiers at an Egyptian military base close to the border with Gaza, in Sinai, entered Egypt through the runnels. Palestinian armed groups in Gaza denied the report, and said that had nothing to do with the attack.

Border tunnels in Gaza became very essential due to the ongoing Israeli siege that was imposed in June of 2007.

Nearly %30 of the goods that enter Gaza are smuggled through the tunnels, and at least 10.000 Palestinians work in these tunnels, the Quds Net news agency reported.

The agency added that the Ministry of Interior in Gaza, run by the Hamas-led government, stated Monday that all border tunnels in Gaza are “well controlled”, and that the government monitors the tunnels to ensure they serve a humanitarian mission that counters the illegal Israeli siege on the coastal region.

Earlier last month, the Egyptian Security Services announced that they managed to uncover a weapons’ storage facility loaded with advances missiles, including antitank and antiaircraft missiles that weapons dealers intended to smuggle into the Gaza Strip via border tunnels.

It is worth mentioning that at approximately 232 have been killed in tunnel collapse accidents, including twenty Palestinians who were killed after the Israeli army bombarded several tunnels as they were in them. Around 800 Palestinians have been injured in these incidents.

Tunnels are also used for smuggling urgently needed medical supplies and medications missing in Gaza Strip hospitals and medical centers due to the Israeli siege.

The siege has left Gazan hospitals and medical center out of basic and specialized supplies and equipment, an issue that has led to the death of more than 400 patients, including infants and children. Many patients died while waiting permits from Israel to cross the border for medical treatment.