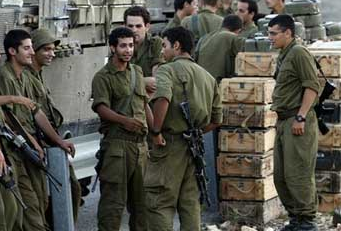 Tuesday February 26, 2013; An Israeli military source stated that, what he called, the “cycle of violence” in the occupied West Bank is far from being over despite relative clam that took place Tuesday. He added that the army is preparing for possible escalation.He also stated that it is believed that the Palestinian Authority (P. A.) in the West bank is trying to contain the situation, and to prevent further escalation, as it is not interested in any escalation.

The source further said that the issue of Palestinian political prisoners, held by Israel, is “a tactic” used by the Palestinians to delegitimize Israel’s arrest campaigns in the Palestinian territories, adding that Israel believes that its arrests “are essential in countering terrorism”, according to the source.

Protests and clashes have been escalating since the death of Arafat Shahin Jaradat, 33, from Sa’ir town, near Hebron city, who died on Saturday February 23 at the Mejiddo Israeli prison. His autopsy revealed that he died due to extreme torture.

He was kidnapped by the Israeli army on February 18, and was subject to harsh interrogation and torture.

Clashes renewed Tuesday in different parts of the occupied West Bank, especially in towns, villages and refugees camps in Hebron.

Several injuries have been reported among the Palestinians while Israeli sources also said that a soldier have been injured near the Al-Fawwar refugee camp in the city.

More than a week ago, the Palestinian Prisoners Society (PPS) reported that a former Palestinian political prisoner from Hebron died at a hospital in Jerusalem after falling into a coma 50 days ago due to a serious health condition resulting from his imprisonment by Israel, and the lack of medical treated while in prison.

The PPS said that Ashraf Abu Thra’, 27, from Beit Awwa village, west of the southern West Bank city of Jenin, was hospitalized at the Augusta Victoria hospital in Jerusalem where he fell into a 50-day coma until his death.

There are currently more than 4500 Palestinians still imprisoned by Israel, including 198 children, eight women, and several elected legislators and officials.

79 detainees have died in prison since the beginning of the Al-Aqsa Intifada (In late September 2000) due to torture, medical neglect, excessive use of force by the soldiers and interrogators, in addition to several detainees who were executed by the arresting officers, former Political Prisoner, Palestinian Researcher, former political prisoner, Abdul-Nasser Farawna said.

More than 202 detainees died or were killed in Israeli prisons since 1967; dozens of detainees also died after they were released due to diseases they encountered in prison or due to complications resulting from extreme torture and bad conditions in prisons.