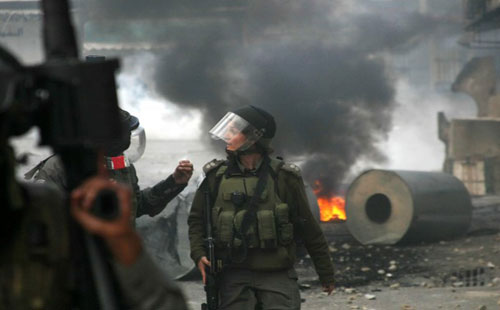 Tuesday February 26 2013; Local sources in Bani Neim town, east of the southern West Bank city of Hebron, reported that Israeli soldiers placed concrete blocks and sands hills at the entrance of the town following clashes with local youths.Head of the Bani Neim town council, Haroun At-Tarayra, told the Radio Bethlehem 2000 Radio that the soldiers placed large cubic concrete blocks and sand barriers on the main entrance of the town, one the road the links it with Wad Al-Joz and other areas in the district.

He added that local youths clashes with the soldiers and hurled stones at them, and that the army fires gas bombs, concussion grenades and rubber-coated metal bullets.

Clashes have also been reported in Ein Al-Askar area, near the Osama Bin Al-Monqith School that was occupied by the army, and was later turned into a Yeshiva for Jewish settlers.

In related news, the army closed the iron gate that was installed at the main entrance of the Al-Fawwar refugee camp, south of Hebron. Soldiers invaded the camp and sprayed local youth with waste-water mixed with chemicals.

Clashes have been escalating in Hebron, and in different parts of the occupied West Bank due to ongoing Israeli violations, and were heightened after a Palestinian man from Hebron died after being kidnapped and tortured at an Israeli interrogation facility.

He was kidnapped by the Israeli army on February 18, and was subject to harsh interrogation and torture.