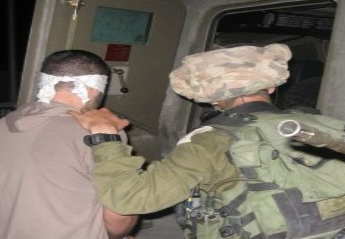 Israeli soldiers invaded, on Wednesday at dawn, Beit Kahel town, north west of the southern West Bank city of Hebron, and kidnapped two Palestinians.Local sources reported that the army broke into and searched several homes before kidnapping Mohammad Omar Al-Atawna, 24, and Eyad Ahmad Al-Atawna, 22. The two were cuffed, blindfolded and were taken to an unknown destination.

Furthermore, the army invaded Doura town, south of Hebron, and handed a Palestinian woman, identified as Andaleeb Al-Hroub, a military warrant ordering her to head to a nearby military base for interrogation.

Furthermore, media coordinator of the National Committee Against the Wall and Settlements, Rateb Al-Jabour, told the Palestinian News & Info Agency (WAFA) that the army, stationed at the entrance the Al-Fawwar refugee camp, fired a gas bomb into the vehicle of resident Mohammad Sa’id Al-Jabareen, causing it to catch fire.

Also on Wednesday at dawn, the army invaded Silwan town, in occupied East Jerusalem, broke into and searched several homes, and kidnapped three Palestinians, including a woman.

Another woman was injured by rubber-coated metal bullets fired by the soldiers.

Five more Palestinians were also kidnapped in different areas in the West Bank district of Bethlehem.

The latest attacks are part of ongoing Israeli assaults and violations against the Palestinians and their property in different parts of the occupied West Bank.