‘I hope I will be buried in my home, Isdod’ 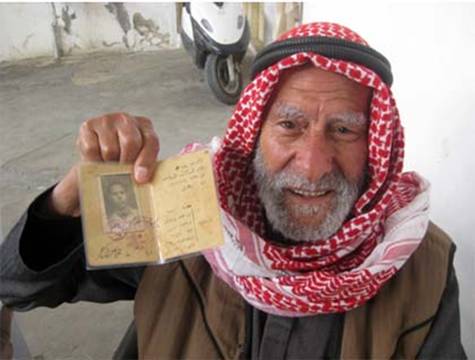 Mohammed Mohammed Mohammed Tuman (85) was 19 years old when, on 20 December 1948, he and his family were forced to flee their home in Isdod, now known as Ashdod. Victims of the Nakba (meaning ‘catastrophe’), they fled along with their entire village of around 8,500 people.

For some time before, inhabitants of other villages had been arriving in Isdod in their hundreds, bringing with them terrible accounts of the massacres they had witnessed in places such as Qibya, Basheet, Deir Yassin, and the Dahmash mosque. No longer safe from the threat of attack by Jewish groups, with the Egyptian army withdrawing from the area, some 30,000 people set out on foot and walked for days until they reached relative safety.

Mohammed recounts his memories of the day his family was displaced from their home:

“We were so afraid that we would be killed. Already, 48 villagers had been killed, including my brother, Ahmed, who was killed by Jewish settlers as he took part in the resistance. 15 more had been taken prisoner. I kept a note of the name of every person who was killed or imprisoned. I have that record still. On that day, my father sent me to speak with the Egyptian commander, to ask him what they would do. I could not meet him, but I spoke to an Egyptian soldier. I asked him, “Are you going to stay and defend us, or withdraw?” He answered that he did not know, but said that he would ask someone. By 4 o’clock that afternoon, there were no soldiers left. The Jewish groups from the nearby settlement of Nizanim were well-armed. They had weapons, tanks, and warplanes. We had nothing. We had to leave.”

The journey south was arduous: “The whole village left, men, women and children. My family and I were only able to bring a small amount of flour to make bread and the clothes on our backs. We spent one night in Hamama, another in Al-Majdal [now known as Ashkelon], and the third night in Herbiya. We slept under trees, but we were scared of being attacked. We had no food. Finally, on the fourth day of our journey, we reached Khan Younis, where some friends of ours lived. Some of my family had been scattered during the chaos, but eventually we gathered together in Khan Younis. Our friends had a shelter made of straw that we were able to live in. After some years, I built a house on the site. In all, we lived there for fifteen years.”

Mohammed was newly-married, and struggled to start a new life with his wife, Basima. “I found some agricultural work, but I only earned 10 piasters per day. At the time, that was the price of a kilo of sugar. Our eldest daughter, Turkiyya, was born in 1949. My wife wasn’t well enough to breastfeed her so we had to buy milk to feed her from a neighbour who had a cow. My mother died the following year, when we were still living in that straw hut. It was a hard and bitter life. Poverty was widespread. I struggled to make enough money to provide for my family through agricultural labour and selling some of the produce. My hands were rough and cracked from using tools to work the land. We lived in suffering for fifteen years, until UNRWA provided us with a shelter in Khan Younis refugee camp in 1963, where we live still. The following year, I began to work for a local family, who had a clothing business.”

Mohammed and his family were forced to flee the refugee camp for a brief time during the Six-Day War of 1967: “We were very afraid. We moved to the El Mowasi area near the sea and hid under the trees. After seven days, Israeli army planes dropped leaflets instructing us to go back to the camp, carrying white flags. We went back. However, I became jobless after the war. Our standard of living was below zero. My wife’s sister and brother were living in Lud, in Israel. They sent me a permit to join them and found me a job as a labourer.”

After 20 years, Mohammed travelled north to the place of his birth: “When I arrived in Lud, I asked if they could bring me to see my village. When I saw Isdod, I was laughing and weeping – laughing because I was seeing my village once more, weeping because it was occupied. It was a mixture of feelings.”

The Tuman family had been farmers and landowners, owning 120 dunums of land near the village before they were forcibly displaced. Mohammed had worked the land with his four brothers and their father. “As I wandered around, I found an old key on the ground. I recognised it as the key for starting the engine of the water well, which had since been stolen. I brought the key back with me to Khan Younis.”

Mohammed continued working in Israel until 1978:

“At the time it was very easy for Palestinians to travel to and from Gaza to work in Israel. When my son, Turkiy, was old enough, he joined me there. Every two weeks or every month, we came back to Khan Younis for a few days. I couldn’t stay in Gaza where there was no work. I had a big family – four sons and five daughters – and I had to provide for them. During that time, I returned to visit my village, Isdod, many times. Finally, after 20 years, I returned to Khan Younis and started a shop.”

It is painful for Mohammed to speak of the more recent Israeli offensives on the Gaza Strip, ‘Operation Cast Lead’ in 2008/9 and ‘Operation Pillar of Defence’ in November 2012: “All of Gaza was in danger during those times and we were even more afraid than in previous wars. Israel has a strong military force with modern weapons, shells, and fighter jets. There was no safe place in Gaza. And I am an old man now. I have been in this wheelchair for three years. I can do nothing to resist the occupation.”

More than 64 years after Mohammed was forced to leave his home, he longs to return to Isdod. “I still wish I could return. If I could leave everything, every house that I stayed in since, everything I have, I would leave it all. I was born there and I am so attached to that place. The future of my nine children and my 42 grandchildren depends on our return to our home in Palestine. I hope I will be buried in my home, Isdod.”

It is estimated that at least 700,000 Palestinians were forcibly displaced from their homes during the Nakba of I948. Under the operational definition of the United Nations Relief Works Agency (UNRWA), Palestinian refugees are people whose normal place of residence was Palestine between June 1946 and May 1948, who lost both their homes and means of livelihood as a result of the 1948 Arab-Israeli conflict. The descendants of the original Palestine refugees are also eligible for registration. As of 1 January 2012, there were 4,797,723 Palestinian refugees registered with UNRWA. 1,167,572 of them live in the Gaza Strip.

Under international law, all individuals have a fundamental right to return to their homes whenever they have become displaced due to reasons out of their control.

The obligation of states to respect the individual’s right of return is a customary norm of international law.

The right of return for Palestinian refugees specifically is affirmed in UN General Assembly Resolution 194 of 1948, which “[r]esolves that the refugees wishing to return to their homes and live at peace with their neighbours should be permitted to do so at the earliest practicable date.”

The resolution also provides that refugees who choose not to return, or who suffered damage or loss to their property, should be compensated by the responsible authorities.