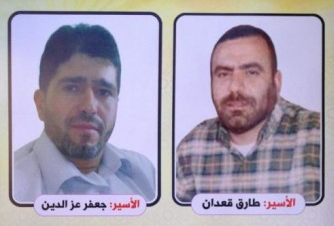 The Palestinian Prisoners Society reported Wednesday that detainees Ja’far Ez-Eddeen and Tareq Qa’daan, have suspended their hunger strike until March 6, the date set by the Ofer military court to deliberate their Administrative Detention order.The court will be holding a hearing at 1 P.M. on Wednesday March 6th, to determine whether to release the two or reinstate detention orders against them, despite the fact that no charges have been filed against them.

The PPS said that, following the upcoming court session, the detainees would determine whether to resume or completely stop their hunger strike.
Their decision came after the Israeli Military Prosecution said that it does not intend request renewing the Administrative Detention orders against the two detainees.

The prosecution has until May 21 2013, but should it officially inform the court it has no intention to ask for more Administrative Detention orders, the detainees would stop their strike.

Head of the Legal Unit at the Palestinian Prisoners Society, Lawyer Jawad Boulos, stated that the court session was held at the Assaf Harofeh Medical Center, and added that the two detainees were brought on wheelchairs suffering very difficult health conditions.

Military councilors and officials attended the session; the judge listened to a report detailing the health condition of the two detainees, and decided to hold a hearing on the “secret files” Israel claims to have against them.

It is worth mentioning that Ez-Eddeen and Qa’daan started their hunger strike on November 27, 2012 demanding their release as they are being held without charges.

On Tuesday, the Addameer Prisoners’ Support and Human Rights Organization’s Documentation Unit confirmed that the number of prisoners on hunger strike in the Occupation’s jails has increased to twelve.