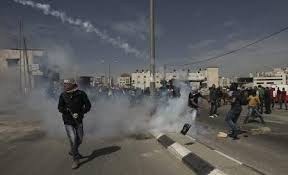 Wednesday February 27 2013; clashes have been reported between Palestinian youths and Israeli in different parts of the occupied West Bank leading to several injuries. Ongoing clashes started after a Palestinian detainee, identified as Arafat Jaradat, died last Saturday at an Israeli prison.Protests and clashes have been escalating since the death of Jaradat, 33, from Sa’ir town, near Hebron city. His autopsy revealed that he died due to extreme torture.

Jaradat was kidnapped by the Israeli army on February 18, and was subject to ongoing harsh interrogation and torture.

Clashes took place in front of the Qalandia terminal, between Jerusalem and Ramallah; Israeli soldiers fired dozens of gas bombs, rubber-coated metal bullets and gas bombs at Palestinian youths who hurled stones at them.
Medical sources reported that several Palestinians have been treated for the effects of teargas inhalation.

On Wednesday afternoon, Israeli soldiers invaded the Al-Yamoun town, west of the northern West Bank city of Jenin, and clashed with dozens of local youths who hurled stones and empty bottles at them.

The clashes started after the soldiers invaded the town, and broke into a home that belongs to resident Riziq Hamdiyya, 50, and searched the property before interrogating the family.

Soldiers also harassed dozens of schoolchildren in the town, and questioned them, an issue that led to further clashes.

Army also installed roadblocks in Al-Widyaan area and at the Jenin-Haifa Junction, stopped and searched dozens of vehicles and interrogated several residents while inspecting their ID cards.

Earlier on Wednesday morning, the soldiers installed a roadblock at the entrance of Ya’bod village, south of Jenin, stopped and searched dozens of vehicles and interrogated the residents.

On Tuesday at night, soldiers invaded the village, and broke into the home of Rashed fares Abu Baker, and informed him that they are looking for his 15-year-old son, Amir, allegedly for throwing stones at the soldiers.

Clashes also renewed in Hebron, in the southern part of the occupied West Bank, especially in the Old City. Several Palestinians have been treated for the effects of teargas inhalation.

Furthermore, clashes took place in the Al-Masharqa area, and near the Tareq Bin Ziad School, close to the Ibrahimi Mosque, in the center of Hebron city.

Clashes also took place in Nablus city, in the northern part of the occupied West Bank, after the army invaded the city from its southern and eastern entrances.

Local sources reported that several armored Israeli military vehicles invaded the city following clashes that took place at the Huwwara roadblock, and at the Jerusalem Road.

On Tuesday, several Palestinians were injured in Nablus, after the army invaded it; medical sources reported that one youth was shot by a gas bomb directly in the head, while several others suffered the effects of teargas inhalation.

The army also kidnapped three children and took them to the nearby Huwwara military base for interrogation.

The incident took place after a number of extremist settlers hurled stones at Palestinian vehicles driving on the Jeet Junction, west if Nablus.