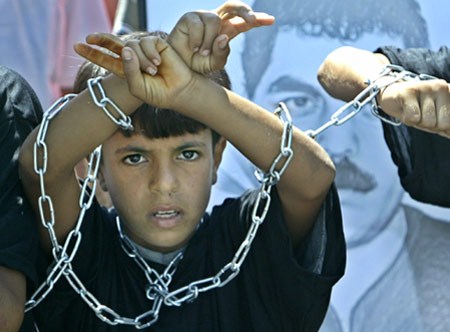 Thursday February 28, 2013, The Ofer Israeli Military Court sentenced a Palestinian child to 19-months imprisonment allegedly for throwing stones at Israeli soldiers in Hebron, in the southern part of the occupied West Bank.The child has been identified as Mahmoud Ghneimat, from Surif town, near Hebron.

Israeli soldiers kidnapped him, along with several other children, ages 14-18, several months ago, and imposed fines on most of the kidnapped children, and sentenced some of them to 6-18 months.

Furthermore, Israel released on bail Dr. Amani Mousa Odah, 26, and forced her under house arrest after the prosecution claimed that she conducted incitement against Israel.

The Wadi Hilweh Information Center in Silwan town, in occupied East Jerusalem, said that the bail amount was set at 1500 New Israeli Shekels, and that the Dr. was ordered under house arrest for 10 days.

Amani was kidnapped on Wednesday at dawn after the army broke into and search her home.

The soldiers also broke into and searched several homes, in addition to breaking into the clinic of Dr. Amani in Salah Ed-Deen Street, in Jerusalem. They confiscated two computers and a camera from her home.

Furthermore, Amani’s sister-in-law was also injured, after the soldiers fired rubber-coated metal bullets before breaking into the residents’ homes.

The wounded woman is the wife of political prisoner, Mohammad Mousa Odah, the brother of Dr. Amani. She was moved to the Hadassah Ein Karem Israeli hospital in Jerusalem.