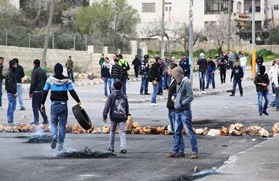 Thursday February 28 2013; Palestinian medical sources in Ramallah, in the central West Bank, reported that at least twenty Palestinians have been injured during clashes that took place with Israeli soldiers near the Ofer Israeli prison, south of the city. Thee residents were kidnapped.Eyewitnesses reported that the army fired dozens of rubber-coated metal bullets at the residents leading to twenty injuries, and that dozens of Palestinians have been treated for the effects of teargas inhalation.

The clashes took place after the army attacked nonviolent protesters marching in solidarity with the Palestinian detainees held by Israel.

Furthermore, soldiers chased dozens of protesters and kidnapped three of them, in addition to violently attacking and beating one protester leading to various cuts and bruises.

Students of the Birzeit University organized the protest in solidarity with all detainees held by Israel, especially the detainees who are holding extended hunger strikes, and are currently in serious health conditions.

They were also protesting the death of Arafat Jaradat, 33, from Sa’ir town, near Hebron city, who was kidnapped by the army on February 18, and was subject to extreme torture that led to his death in an Israeli interrogation facility last Saturday.