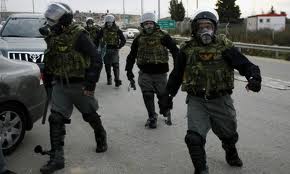 The Ahrar Center also reported that 38 of the kidnapped Palestinians have been taken prisoner at military roadblocks in different parts of the West Bank,

Two patients were kidnapped at the Beit Hanoun (Erez) terminal, between the Gaza Strip and Israel, despite the fact that they were granted permits to enter Israel for urgently needed medical treatment.

Three of the Palestinians who were kidnapped in the West Bank have been taken prisoner at the Al-karama between the West Bank and Jordan; one of them is a local Caricature identified as Mohammad Saba’na.

The Ahrar Center said that the arrests carried out by the army in February witnessed a sharp increase comparing to January as the army kidnapped 350 Palestinians last month.