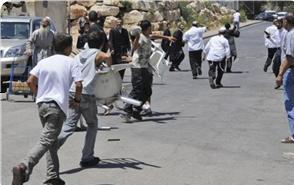 Sunday March 3, 2013; a group of fundamentalist Israeli settlers assaulted thee Palestinian schoolchildren in Jaba’ village, north of occupied East Jerusalem. The three are brothers; this is the second attack against them since Thursday.Mahmoud Abu Ghaya, a resident of the Al-Jahaleen Bedouin village, stated that the setters attacked three schoolchildren while walking to school inflicting various injuries.

The army arrived at the scene and prevented Yahia Habayeb, a local reporter working for the Ajyal Radio, from documenting the attack, and confiscated his camera.

Abu Ghaya added that Bedouin families in the area have been repeatedly attacked; adding that most attacks targeted schoolchildren.

He further stated that one of his children is refusing to go to school fearing additional attacks by the settlers.