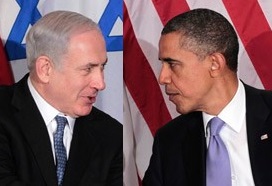 American President, Barack Obama, demanded Israeli Prime Minister, Benjamin Netanyahu, to present a timetable for the Israeli withdrawal from the occupied West Bank, the World Tribune has reported.According to the report, an Israeli source stated that Obama clearly informed Netanyahu that his visit to the region is not meant for media consumption, but is focused on Iran and the establishment of a Palestinian State.

The source added that it appears that Obama will be acting on his own should Tel Aviv fail to present any feasible plan for withdrawal.

Obama is asking Netanyahu to present a detailed West Bank withdrawal plan as part of an American initiative for a peace agreement that leads to the establishment of a Palestinian State in 2014, according to Israeli sources.

Furthermore, the World Tribune reported that Netanyahu’s office is worried about the American demand, especially since the Israeli Prime Minister has not been able to form a new government due to extended coalition talks that has not led yet to forming a new government.

Addressing the American Israeli Public Affairs Committee (AIPAC), Sunday, Israeli Defense Minister, Ehud Barak, stated that a comprehensive peace agreement with the Palestinians is not possible under the current circumstances.

Barak added that Israel wants an agreement “that guarantees its security”, and stated that Tel Aviv will have to take what he called “unilateral steps to avoid becoming a bi-national state”.

He also stated that the bilateral steps that Israel should take include ensuring that all of its settlement blocs, built in the occupied West Bank, will be part of Israel, and ensuring a Jewish majority in the country.

Barak also said that Israel must also maintain its security and military presence in the occupied Jordan Valley.

Israel’s ongoing invasions, attacks, the demolition and takeover of Palestinian homes in occupied East Jerusalem, are part of various main issues that led to the collapse of direct peace talks with the Palestinian Authority.

Israel’s settlement construction and expansion activities in the occupied West Bank, including in and around occupied East Jerusalem, are among the main causes for the collapse of these talks.

Tel Aviv is also refusing to recognize the internationally guaranteed Right of Return of the Palestinian refugees, and is refusing to hold talks over borders and national resources.