Clashes Reported In Al-Khader, Near Bethlehem 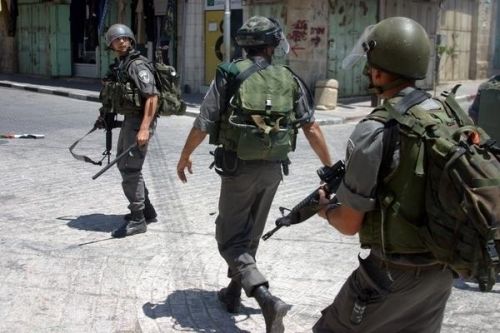 Israeli soldiers invaded Al-Khader several times over the last few days, an issue that led to several clashes between the invading soldiers and local youths.

Also on Monday, the army invaded the northern West Bank city of Jenin, and clashed with dozens of local youths.

Local sources reported that the soldiers were also deployed around the Al-Quds Open University in the city, and in the areas of Marah Sa’ad, As-Sweitat, and on the Jenin-Jaffa Road.

In related news, the army kidnapped on Monday evening a Palestinian resident of Beit Ummar, north of Hebron, as he was trying to cross the Ak-Karama Bridge on his way back from Jordan. The resident has been identified as Ala’ Hussein At-Teet, 23.

The army, in different parts of the occupied West Bank, has kidnapped 19 Palestinians, including at least three children, on Monday.

In Jenin, in the northern part of the West Bank, soldiers kidnapped a Palestinian youth identified as Mohammad Ahmad Darweesh, 21, after stopping him at the Jenin-Nazareth Road, near the Al-Jalama village. Soldiers also kidnapped one Palestinian, identified as Ahmad Bassam Nassar, 23, and installed several roadblocks around the village.

Local sources in Azzoun reported that the soldiers violently broke into and searched several homes in the town.

The soldiers also invaded Ras Al-Ein neighborhood and the Old Town area in Azzoun, and kidnapped one Palestinian identified as Mohammad Moneeb Samihna, 29.

The latest wave of invasions, arrests and attacks is part of ongoing Israeli violations against the Palestinians and their property in different parts of the occupied West Bank and the Gaza Strip.