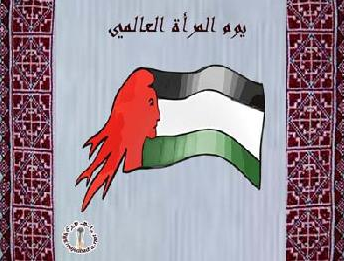 On the 8th of March, the world celebrates the International Women’s Day, which has been observed as a popular event since 1977, when the United Nations General Assembly invited Member States to proclaim this day as the UN Day for Women’s Rights and International Peace.Despite continuous efforts to support women’s struggle to achieve equality, eradicate discrimination against them, and to promote their status in the society, women continue to suffer. In many parts of the world their condition is deteriorating due to the various restrictions imposed on them, which often result in violation of their human rights.

As we mark the International Women’s Day this year, many Palestinian women are still healing from the Israeli military offensive on the Gaza Strip in November 2012. As a result of this offensive, 171 Palestinians were killed, out of which 102 were civilians, including 14 women (comprising of 13.7% of the total number of victims).

Additionally, 625 Palestinian civilians were wounded, including 93 women (14.8% of the wounded civilians).

PCHR’s documentation and observations indicate that during the offensive most of the female casualties resulted from the excessive use of force by Israeli forces, which is a violation of the protection afforded to civilians under the international humanitarian law.

Israeli forces allegedly failed to: fully comply with the principle of distinguishing between the civilian population and military targets; observe the prohibition on indiscriminate attacks; and take necessary precautions to ensure that the targets being attacked are not civilian persons or objects.

PCHR’s investigations indicate that women were victimized due to the Israeli forces’ disregard for the above-mentioned principles of international humanitarian law.

For instance, on 18 November 2012, the Israeli forces attacked and destroyed a house belonging to the al-Dalu family in Gaza City.

In addition to these casualties, Palestinian women also suffered from psychological trauma as many of them lost their family members in these attacks. Also, thousands of women were internally displaced during the offensive.

Over the past year, the Israel’s policies have directly affected many women in the Gaza Strip, for instance many women were restricted from visiting their sons or husbands detained in Israeli prisons.

Palestinian women have also been affected by the Israeli closure imposed on the Gaza Strip.

The Israeli policies impose socioeconomic hardships on Palestinian civilian population, especially by depriving them of resources essential to fulfill their basic requirements, including medicines.

Israel has also imposed severe restrictions on the movement of Palestinians between the Gaza Strip and the West Bank.

In addition to this, women have also been subjected to violence arising from within the Palestinian society, particularly because of the so-called “honour killing” practice.

According to PCHR’s documentation, 3 women were killed due to this practice, despite the Palestinian Authority’s abolition of the lenience in sentences issued against the perpetrators of such crimes.

PCHR has also observed practices that restrict women’s personal freedom, including but not limited to, imposing the Shari clothes on female students of al-Aqsa University; forcing students of secondary schools to wear the hijab; and the cancellation of the marathon that was organized by UNRWA and was supposed to take place in April, because of the restrictions imposed by the government on women’s participation in the marathon.

On the International Women’s Day, PCHR reiterates its full support for the struggle of Palestinian women, who suffer from both the Israeli practices and violations and violence from within the Palestinian society, and:

1. Calls upon the international community to fulfill its obligations towards the occupied Palestinian people, and to take steps to end the suffering of Palestinian civilians, especially women;

2. Calls upon the High Contracting Parties to the Fourth Geneva Convention to fulfill their obligations under the Convention by compelling Israel to respect the Convention and ensure protection to Palestinian civilians, including women;

3. Calls upon the Palestinian National Authority to take serious measures in order to stop killings related to the practice of “family honor” and to ensure that punishment of the perpetrators of such crimes is proportional to their seriousness.