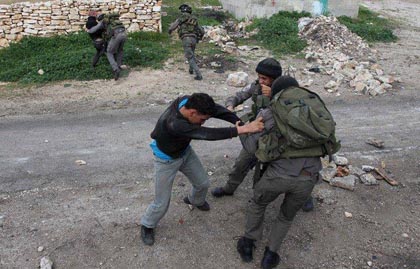 The Israeli forces conducted 69 incursions into Palestinian communities in the West Bank.

At least 60 Palestinian civilians, including 12 children, a photojournalist and a researcher in prisoners’ affairs, were abducted in the West Bank, 46 of whom were abducted during incursions and 13 in peaceful protests.

The Israeli forces established dozens of checkpoints in the West Bank. At least 3 Palestinian civilians, including 2 children, were abducted at checkpoints.

Israel continued to take measures to create Jewish majority in occupied East Jerusalem. The Israeli forces forced a Palestinian civilian to demolish his house with his own hands.

In the Gaza Strip, the Israeli forces continued to open fire at the Palestinians near the border fence. As a result, 3 Palestinian civilians, including a mentally disordered person, were severely wounded.

On the same day, the Israeli forces positioned in watchtowers along the border fence, north of Beit Lahia, north of the Gaza Strip, opened fire at a group of persons, who were few meters away from the fence. As a result, a civilian was wounded.

On 28 February 2013, Israeli forces submitted Palestinian civilians from Kufor Deik village, west of Salfit, notices to halt construction work in two occupied houses, under pretext that they are established in Area (C), which falls under Israeli jurisdiction according to the Oslo Accords.

On 02 March 2013, dozens of settlers, coming from ‘Havat Maon’ settlement, established on confiscated Palestinian agricultural lands southeast of Yatta, south of Hebron, attacked Palestinian farmers while working in an their lands, located near the aforementioned settlement. The settlers threw stones and empty bottles at the farmers; half an hour later, a unit of the Israeli forces raided the area and declared it a closed military zone. The farmers refused to leave, and so the Israeli soldiers assaulted them, abducted 16-year-old Basel al-‘Adra and transported him to an unknown destination.

On the same day, a group of settlers from ‘Nafi Daniel’ settlement, established on Palestinian lands southwest of al-Khader village, south of Bethlehem, demolished an agricultural room in al-Thaghra area, north of the aforementioned settlement.

On 05 March 2013, a group of settlers, coming from ‘Beit ‘Ayen’ settlement, adjacent to Nahalin village, southwest of Bethlehem, raided al-Jamjoum area, southwest of the aforementioned village. The settlers, who protected by the Israeli forces, broke 100 olive trees and fruitful almonds, planted on an area of approximately 10 dunums and are over 30 years old.

In the same context, the Palestinians organized a number of peaceful protests in solidarity with the Palestinian prisoners, particularly those who are on hunger strike in the Israeli jails. The Israeli forces used excessive force against these protests. As a result, 17 Palestinian civilians, including 6 children and a freelance photojournalist, were wounded.

On 01 March 2013, a 40-year old civilian was hit by a tear gas canister in the head when an Israeli infantry unit moved into Bab al-Zawiya area in the center of Hebron.