15 Families Ordered Out Of Their Residence, Lands, Near Hebron 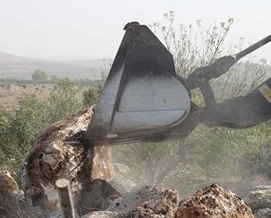 Monday March 11, 2013, the Israeli army handed 15 Palestinian families living in Al-Janoub area, east of Sair town in the southern West Bank district of Hebron, military warrants ordering them to leave their homes and lands.The army cited “military considerations” to its new decision that is similar to dozens of orders issued by the army in the area.

The fifteen families are facing eviction and displacement due to the Israeli decision, the Maan News agency has reported.

Maan quoted resident ‘Abed Shalalda stating that fifteen families, including his own, were ordered out of the area, and were told that the army will resort to violence “should they fail to comply”.

The families in this area live in tents; some even live in caves and ancient structures, as the Israeli military and the Israeli Civil Administration Office operating in the occupied West Bank do not recognize their residency rights.

Shalalda said that the families have deeds proving ownership of the land, but the army is not recognizing these documents.

Bedouin tribes in Hebron, as well as in different parts of the West Bank, and in the Negev desert are subject to ongoing violations and attacks carried out by the Israeli Authorities,

Over the weekend a group of fundamentalist Israeli settlers assaulted three Palestinian schoolchildren in Jaba’ village, north of occupied East Jerusalem. The three are brothers; this is the second attack against them since Thursday.

In 2005, Israel approved the so-called “Negev Development Plan” aiming at building shopping centers and tourist areas, but at the same time displacing around some 65.000 Bedouins living in what Israel refers to as “unrecognized villages”.

Al-Araqeeb village in the Negev is one of the most impacted “unrecognized villages” as it was destroyed more than 41 times.

The “Prawer plan” calls for annexing more than 700.000 Dunams (185329 acres) and displacing the residents by demolishing 14 villages in the area.

Unrecognized villages in the Negev are under continuing Israeli attacks and violations, as Tel Aviv does not recognize the residents’ right to live on their land — land they inhabited long before the 1948 creation of the state of Israel in historic Palestine.