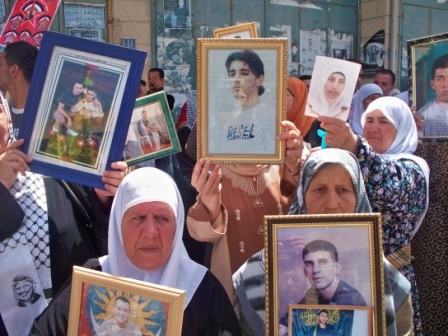 Monday evening March 11, 2013, the Palestinian Prisoners Society (PPS) reported that the administration at the Ofer Israeli prison moved three hunger striking Palestinian detainees into solitary confinement. The PPS said that the three detainees have been identified as Mohammad An-Najjar, Zakariyya Al-Heeh, both from Hebron, and Ibrahim Al-Sheikh from Jericho.

Furthermore, the PPS said that one of its lawyers visited detainees in the Megiddo Israeli prison, who told him that the prison administration cut water supplies for an entire day in section 2 of the facility, and recently denied the detainees the right to family visits twice.

It said that the situation in Megiddo has been unstable since the death of detainee Arafat Jaradat who was tortured to death on Saturday February 23, 2013.

In addition, detainees in Eshil prison have returned their meals, and threatened a larger hunger strike demanding the administration to stop its violations against them, and end the solitary confinement of several detainees who are still isolated in their cells.

They said that the prison administration is deliberating denying medical attention to several detainees who are ill and need urgent treatment.

Last week, 20-140 detainees in Gilboa’ declared strike and returned their meals as part of further steps that also come in retaliation to the death of detainee Jaradat.

Eight on Hunger Strike: Hunger Strikes are the Weapon of Prisoners in the Fight against Administrative Detention