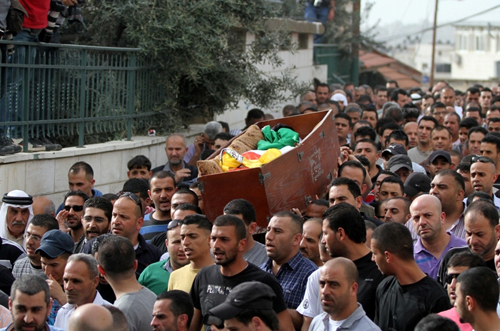 Friday evening March 15, 2013, Palestinian medical sources reported that a Palestinian man, identified as Mo’ayyad Nazeeh Ghazawna, 34, from the Al-Ram town, north of occupied East Jerusalem, died of wounds suffered, on February 22, after being struck in the chest by a gas bomb fired by Israeli soldiers as he was driving his Taxi.Medical sources reported that Ghazawna suffocated and his heart stopped after being struck by the gas bomb, and was moved to the Intensive Care Unit at the Palestine Medical Center in Ramallah.

The slain Palestinian is married and a father to a 4-year-old boy, and a 5 year-old girl, and his wife is due to give birth to their third child in the coming few days.

Hundreds of residents participated in his funeral Friday, and marched carrying his body to a local graveyard while chanting slogans against the occupation and its ongoing crimes.

Israeli soldiers arrived at the scene, attacked the residents, fired gas bombs, and rubber-coated metal bullets at them.