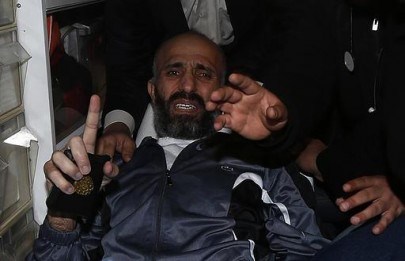 Palestinian media sources reported that detainee Ayman Sharawna, who started his open-ended hunger strike after his arrest by the army, on July 1, 2102, was released by Israel but was not allowed back home in Hebron, in the southern part of the occupied West Bank. Israeli soldiers kidnapped his brother.Sharawna entered the Gaza Strip via the Erez (Bet Hanoun) crossing, and was welcomed by thousands of Palestinians, and officials of the Hamas-led government in Gaza.

The agreement that secured his release states that he will not be allowed in the West bank for ten years, the Palestinian Information Center reported.

Palestinian Minister of Detainees in Gaza Atallah Abu As-Seej, stated that the release of Sharawna is a victory after his long steadfastness despite his deteriorating health condition

“We were hoping that he would be released, and allowed back home with his family”, Abu As-Seej said, “But he is free now, he is in Gaza, another Palestinian city, much better that spending additional 20 years in prison, Gaza welcomes him, and will provide him with whatever he needs to feel at home”.

In related news, Israeli soldiers kidnapped, on Monday at dawn, Jihad Sharawna, the brother of Ayman, only a few hours after his brother was released.

Local sources reported that the soldiers broke into the home of Jihad, and violently searched it, causing excessive damage, confiscated his mobile phone, and his computer, before blindfolding and cuffing him.

In an earlier invasion, the army also kidnapped Ismail Sharawna, the nephew of Ayman, and moved him to the Asqalan interrogation and detention facility.