Abbas to the Arab League, if attempts to renew talks fail, we may go to The Hague 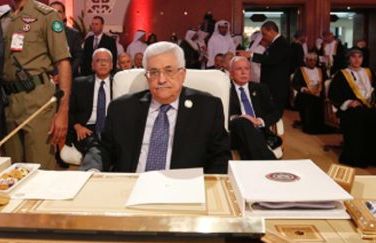 Palestinian president Mahmoud Abbas said Palestinians have the right to go to the International Court of Justice if the attempt to renew negotiations with Israel in the coming few months fail.Abbas remarks came during his speech to the Arab League summit, during which he briefed Arab leaders on his latest meeting with U.S. President Barack Obama in Ramallah.

Obama had asked Abbas not to keep the freeze of Israeli settlement activities in the West Bank a pre-requisite for the resumption of the long-stalled peace talks.

Abbas also said that he told Obama that the Palestinians continue to insist on the establishment of a Palestinian state with a capital in East Jerusalem and the release of Palestinian prisoners.

U.S. Secretary of State John Kerry is scheduled to visit Palestine and Israel in bid to restart the negotiations in June.

An Arab League delegation is scheduled to meet with senior US government officials in the coming few weeks ahead of Kerry’s visit to discuss ideas of renewing peace talks.

The talks are based on two main principles; a predetermined timetable for talks and operational decisions for ending the occupation and facilitating the establishment of a Palestinian state along 1967 borders, with a capital in East Jerusalem.

The Arab leaders have also decided to establish a fund of One Billion dollars to “Protect Islamic and Arab character of East Jerusalem”.

Palestinian Human Rights organizations report that Israel is implementing a plan to gradually erase Arab presence in Jerusalem, by not allowing Palestinian residents of Jerusalem to build houses and by building more Jewish Settlements in the city.