Israel To Build Settlement Units On Palestinian Lands In Bethlehem 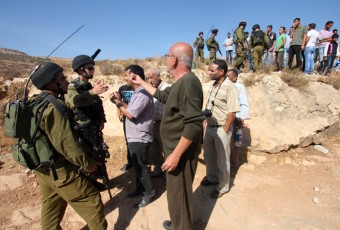 The Israeli authorities in the occupied West Bank have issued a military order for the illegal confiscation of Palestinian lands in Khirbit Ed-Deer area, west of Nahhalin village, in the Bethlehem District, in order to build 70 units for Jewish settlers, and public buildings, the Palestine News Network (PNN) had reported.PNN quoted the deputy head of the Nahhalin village council, Jamal Najajra, stating that the lands in question are dozens of Dunams, located near Beit Illit illegal settlement, built on lands that belong to the residents of Husan, Nahhalin and Wad Fokeen, and are planted with olive trees.

Najajra added that Israel intends to build 70 units for Jewish settlers in addition to a number of public buildings.

He said that the new planned constructions are meant to connect Beit Illit settlement with Gavot settlement, by illegally confiscating Palestinians orchards leaving dozens of families without the main source of livelihood, and without the ability to build homes in the area.

Najajra added that the village council has contacted attorney Ghayyath Nasser, so that he can file the needed appeals in Israeli courts.

He also said that this is not the first time Israel decides to annex Palestinian lands in the area, as they confiscated lands in the Al-Jamjoum area, Salem Valley, and Ein Fares where Israel dumps waste-water coming from Beitar Illit settlement, PNN said.