Ansar 4 Convoy To Head To Gaza May 5th 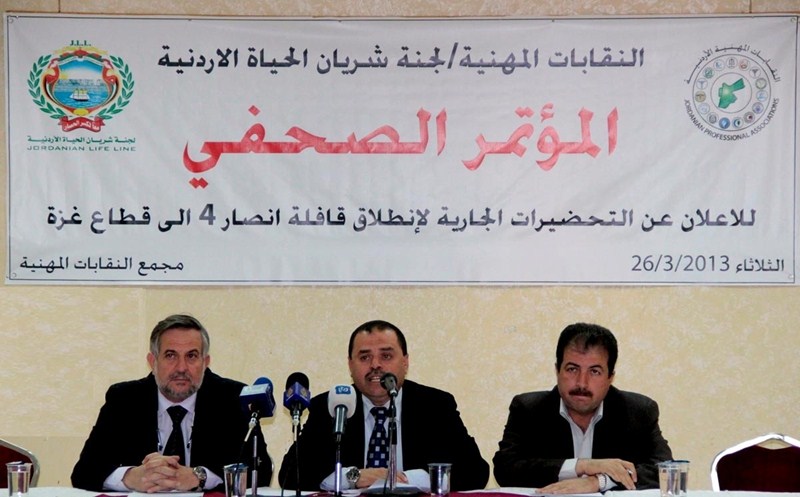 The Artery of Life Committee in Amman – Jordan declared Tuesday that it is starting preparations for sending the “Ansar 4” solidarity convoy to the Gaza Strip in order to deliver financial, medical and humanitarian supplies to the Palestinian people in the besieged coastal region.The convoy will be leaving Amman on May 5th after concluding all needed preparations, and after collecting all donations in order to purchase the needed supplies.

Dean of the Engineers Union in Jordan, Agricultural Engineer Mahmoud Abu Ghneima, stated during a press conference held in Amman on Tuesday, stated that occupied Palestine, occupied Jerusalem and the Palestinian cause in general are Arab, Islamic and international causes that deserve all needed support.

Abu Ghneima added that besieged Gaza is now the core issue for professional unions interested in developing it and easing the suffering of its besieged people.

On his part, head of the Artery Of Life Committee, Engineer Wael As-Saqqa, stated that the committee played in essential role in founding and developing the Occupational Training Center in the Gaza Strip, and intends to increase the financial support provided to development projects in Gaza to $50.000 through direct participation of local banks and companies.

He also stated that the convoy is working on collecting approximately $100.000 in order to buy medical supplies and medical equipment urgently needed in Gaza, and added that the committee previously managed to collect a half a million USD that were used in development projects in Gaza.

As-Saqqa further said that he expects that the committee will be able to collect $200.000 for medical supplies due to support from individuals and intuitions in Jordan.

The convoy will be flying to Egypt on May 5th, after landing at the Al-Arish Airport in Egypt, it will be heading by land to the Gaza Strip carrying all collected donations and nearly 80 union members and individuals.

It is worth mentioning that the Artery Of Life Jordanian Committee usually grants $7000-$10000 to 50 small projects it adopts, in addition to granting the Ministry of Health in Gaza medical supplies and medications after contacting it to ensure providing the missing medications and equipment.