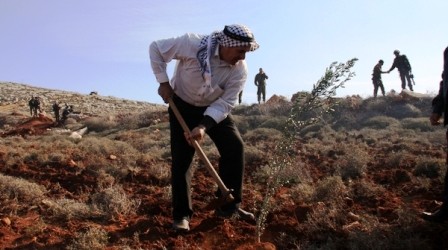 Marking the 37th Anniversary of the Palestinian Land Day, Palestinians in Al-Khader town, near the West Bank Palestinian city of Bethlehem, planted 200 Olive saplings amidst ongoing settler attacks against Palestinian orchards and lands in the area.“The olive saplings have been planted in Shoshhala area that was illegally confiscated by the army in 1967 after Israeli occupied the rest of Palestine, and Israel is ongoing with its illegal attempts to confiscate the lands, in order to expand nearby illegal settlements”, Ahmad Salah, coordinator of the Popular Committee against the Wall and Settlements in Al-Khader told the Radio Bethlehem 2000.

Salah said that, just one day ago, the settlers uprooted 200 olive saplings in Al-Khader under the pretext that the orchards in question “belong to Israeli settlements”.
The Palestinians started marking land day 37 years ago after Israel illegally decided to steal, and stole, thousands of Dunams of Palestinian lands, especially in the Galilee in 1976.

Following the illegal Israeli decision in 1976, Palestinians in historic Palestine declared a strike, and held massive nonviolent protests before being faced with brutal Israeli military force in different Arab towns and villages.