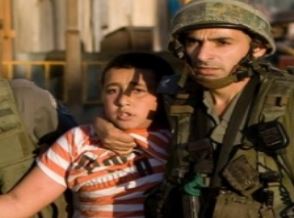 Saturday March 30, 2013, Israeli soldiers kidnapped Beit Fajjar town, south of the West Bank city of Bethlehem, and kidnapped one Palestinian child after breaking into his home and violently searching it, the Radio Bethlehem 2000 has reported.Local sources reported that the army kidnapped Omar Anwar Thawabta, 16, for the third time in a row, after more than twenty military vehicles invaded the town.

Thawabta was kidnapped two times before and was release on bail.

Last week, the army kidnapped 30 Palestinians after claiming that they are members of a cell that belong to the Fateh movement of Palestinian President, Mahmoud Abbas.

Israel claims that members of the so-called cell opened fire at Israeli military vehicles and settler cars, and that they planned further attacks against the army and the settlers.

The Fateh movement denied the Israeli claims, and said that the allegations are part of ongoing Israeli incitement against the movement and its members in the occupied West Bank, including in occupied East Jerusalem.