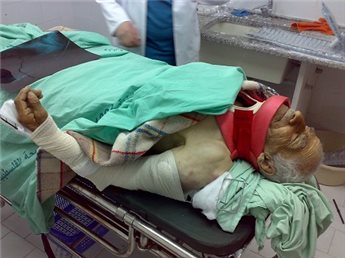 A Palestinian elderly farmer who was attacked by a group of settlers while working his lands near Tulkarem Friday remains in the hospital and will likely require surgery, according to medical sources.Hasan Barhoush, age 80, was working in his field in the village of Kafr al-Labad, as he has done for decades, when a group of settlers came out of Enav settlement and began to beat and kick him. He was taken to Thabit Hospital in Tulkarem, where he is being treated for multiple injuries.

Israeli settler attacks on unarmed Palestinians are frequent, and are rarely prosecuted. Two weeks ago a Palestinian man was badly beaten by an Israeli settlement security guard in the village of Susiya, in the southern West Bank.

Since that attack, settlers in the northern and southern West Bank have cut down more than 100 Palestinian olive trees, settlers near Nablus smashed the windows of Palestinian cars, and settlers began expanding a settlement near Tulkarem.

In addition, a new report has been released showing that Israel has allocated 99.3% of the land in the West Bank for settlement expansion, in direct violation of international laws, treaties and signed agreements with the Palestinians.

Earlier this month, a group of settlers attacked a Palestinian woman in Jerusalem, tearing off her head cover and shouting insults. In response, and Israeli officer posted on his Facebook page “It’s a shame the Arab whore didn’t die.”

No arrests have been made of any of the settlers who attacked Palestinians in the last month.