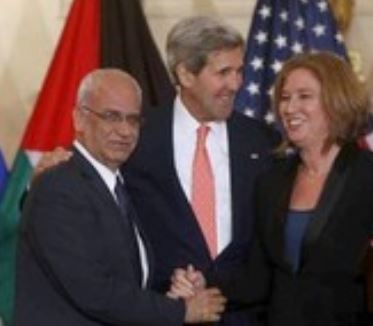 United Foreign Secretary, Jennifer Psaki, stated Thursday [August 8, 2013] that the next round of direct Palestinian-Israeli talks will be held on August 14 in Jerusalem, then in the West bank city of Jericho.Psaki stated that this second round of direct talks would be held under direct supervision of U.S. Special Middle East Envoy, Martin Indyk, and added that Secretary of State, John Kerry, will not be giving any statements after the meeting.

Direct talks started under American mediation when Israeli Chief Negotiator, Tzipi Livni, met with her Palestinian counterpart, Dr. Saeb Erekat, on July 29 and 30. Kerry supervised the talks that started after he visited the region six times starting in March this year.

The talks started with the intent to reach a final status agreement in nine months despite enormous obstacles that could topple them, including Israel’s ongoing invasions into Palestinian communities, and its ongoing assaults, in addition to its ongoing illegal settlements construction and expansion activities in the occupied West Bank, including in occupied East Jerusalem.

Israel also refuses to hold talks on borders, natural resources and refuses to recognize the internationally guaranteed Right of Return of the Palestinian refugees.