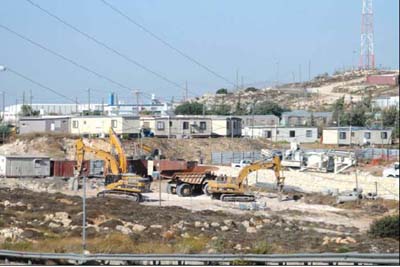 [Sunday August 11, 2013] Israeli “Housing Minister”, Uri Ariel, and the Jerusalem City Council head, Nir Barkat, placed the cornerstone of a new settlement, meant for Haredi Jews, on Palestinian lands in Jabal Al-Mokabbir Palestinian town, south of occupied East Jerusalem. A settler group, known as Emonah, will implement the new constructions. Parking lots for the new settlement have already been built nearly five years ago on three Dunams of land, but the settlement was not built due to legal procedures after the Palestinians filed appeals against the constructions, but an Israeli court ruled against the Palestinians and the Israel government Okayed the plan.

Mark Regev, spokesperson of Israeli Prime Minister Benjamin Netanyahu, stated that the new “residential construction plan that was approved today [Sunday] around Jerusalem, and in settlement blocs in the West Bank, are constructions in areas that will always be under Israeli sovereignty under any peace agreement with the Palestinians”.

Resident Jamal Abu Sarhan, a Palestinian impacted by the construction, told the WAFA news agency that the City Council in Jerusalem closed the main road that leads to his home, and converted it into a pedestrian only pathway.

“I pay thousands of shekels in taxes to the Jerusalem City council, but I get no services, and now they surrounded me, and left me a small pathway that is less that 2 meters wide”, he said, “No cars, no ambulances, no fire trucks… can reach my place”.

He also said that he received an official notice informing him that Israel intends to confiscate a half Dunam (0.12 Acres) of land he owns in front of his home.

“This land is mine, I paid more than 150.000 NIS to fix it and make it good”, Sarhan added, “Now they are just going to take it away from as Israel wants to turn it into a public area for the settlement”.

Also, resident Ahmad Obeidy stated that he fears the new settlement would lead to conflicts between the settlers and the residents similar to what is happening in Nof Etzion settlement, built on Palestinian lands in Jabal Al-Mokabbir.

Lawyer Majed Hamdan told WAFA that he has been representing the residents in Israeli courts for several years now in an attempt to prevent the implementation of the new settlement plan, and that he managed to stop it for two years.

“But Emonah is supported by various international groups that fund illegal settlements in Palestine, they can pay legal fees, hire lawyers, lobby…”, Hamdan said, “The residents cannot do that, they got no money or power, they are just being displaced, losing their rights and lands”.
He further stated that the residents have legal ownership documents that were submitted to the court and the City Council.

“But Israel targets Arab neighborhood, villages and towns in Jerusalem, Hamdan added, “They want to change the geography and demography of occupied Jerusalem”.