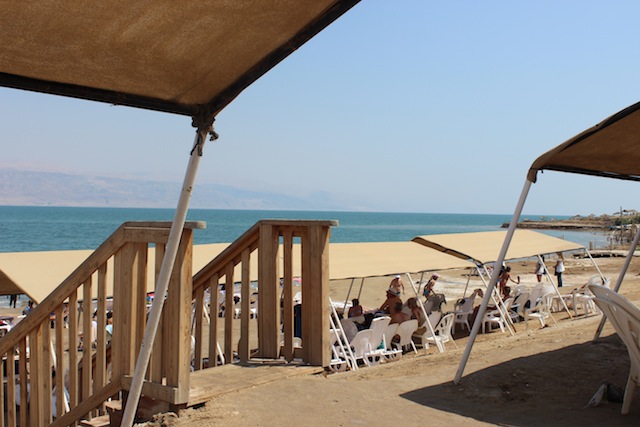 Israel’s total control of the Jordan Valley and Dead Sea is depriving the Palestinian economy of income and jobs, while bringing in big profits for the occupation.Like many visitors to Palestine, I wished to swim in the Dead Sea, a geographical marvel whose mineral-rich waters and mud are renowned for their health benefits. I got what I wished for – I floated in the salty waters, and covered myself with mud – but I also did something not wished for – I supported Israel’s ongoing occupation of Palestine. You see, I didn’t realize before arriving at its shores that the part of the Dead Sea located within the borders of the West Bank is completely controlled by Israel.

More specifically, the West Bank territory bordering the Dead Sea, along with the rest of the Jordan Valley, is classified by Israel as “Area C”. This means Israeli military and civil authorities control security, planning, and construction in the area, and Palestinians living and working there may not build or renovate anything without first getting permission from Israel. Therefore, if Palestinians wanted to build a resort along a strip of Dead Sea coastline, they would first have to ask Israel. But instead of allowing Palestinians to develop Dead Sea tourism on territory that is lawfully theirs, Israel has granted the illegal settlements a monopoly.

These illegal settlements and their Dead Sea tourism facilities are built on Palestinian land that Israel has appropriated using different methods. Following its occupation of the West Bank in 1967, Israel declared lands “closed military areas”, “nature reserves”, “abandoned property”, or “State Land”. For example, the settlement of “Mitzpe Shalem”, among others, was established in 1970 on “State Land”. This settlement now operates a swimming beach and a “mineral beach”.
Israel, by granting illegal settlements the sole right to develop tourism facilities on the West Bank’s Dead Sea coastline, has starved Palestine of income and employment.

While the Palestinians in the Jordan Valley face harsh economic conditions, Dead Sea enterprises run by Israeli settlers are generating healthy profits. For example, the Israeli settlement of “Mitzpe Shalem” is home to Ahava Dead Sea Laboratories Ltd., a company that extracts minerals and mud from occupied territory for the manufacture of cosmetics. The Palestinian human rights NGO Al-Haq published a report titled “Pillage of the Dead Sea” which states that Ahava generated revenues of 142 million USD in 2007; Bloomberg reported that, in 2012, Ahava’s sales rose to 160 million USD. The Al-Haq report, however, describes how these profits have exacted a heavy toll on the Dead Sea environment.

Al-Haq reports that Israel’s complete control over West Bank water resources has allowed the Israeli settlements to develop water-intensive agricultural operations that have severely reduced the flow of the Jordan River. Additionally, Al-Haq cites unsustainable mining practices in Israeli settlements as contributing to the declining Dead Sea water level. Also, the Dead Sea and surrounding area are polluted by the settlements’ domestic, agricultural, and industrial activities.

Al-Haq notes that Israel’s practices in the occupied Dead Sea area violate international humanitarian and human rights law because “they favour Israeli economic interests while denying the Palestinian people their right to self-determination.” Also, according to Al-Haq, Israel has been violating its obligations as an occupying power and is even committing the war crime of pillage by providing financial benefits to Dead Sea settlers and by granting permission for Ahava Dead Sea Laboratories Inc. “to mine and manufacture products that utilize the mud extracted from the occupied Dead Sea area…”

At the unveiling of the joint Ministry of National Economy and ARIJ report in 2011, the Guardian newspaper quoted Palestine’s economy minister Hasan Abu Libdeh as saying that “[it] should be clear to the international community that one reason for Israel’s refusal to act in good faith as a partner for peace is the profits it makes as an occupying power.’ And thanks to tourists who continue to flock to the Dead Sea, profits will continue to flow to the occupation’s coffers.