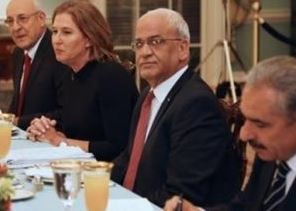 Palestinian sources have reported that Palestinian and Israeli negotiators will be convening Monday (September 2 2013] as a follow-up meeting of a round of direct talks held in Jerusalem Sunday.Fateh leader, Nabil Shaath, stated that the talks have not made any progress, and that the Israeli side did not present any viable proposal that could boost the negotiations.

Shaath added that the Palestinian Authority might consider heading to the United Nations, and other international organizations, should the talks hit another deadlock, mainly due to Israel’s ongoing violations, invasions, and its illegal settlement construction and expansion activities.

Jen Psaki, spokesperson for the United States Department of State, stated that the American envoy to the Palestinian-Israeli peace talks participated in one meeting since the talks started in late July. Psaki refrained from commenting on the outcome of these talks.

She said that both negotiations teams have been convening regularly since direct talks were resume on July 29.

“The talks have been serious, U.S. Special Envoy, Martin Indyk, and his team, have been informed on the outcome of talks, he also participated in one session of direct talks”, Psaki stated, “But, as we said before, we cannot reveal further details”.