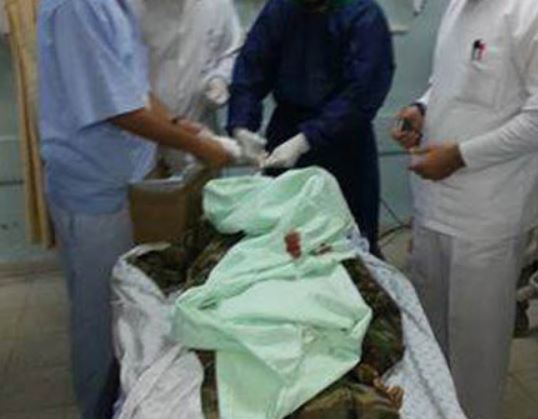 [Friday November 1, 2013] The Al-Qassam Brigades, the armed wing of the Hamas movement, has reported that four of its fighters have been killed during armed clashes with Israeli soldiers invading Al-Qarara and Abasan Al-Jadeeda area, east of Khan Younis, in the southern part of the Gaza Strip.The Brigades said that Khaled Mohammad Abu Jom’a, 35, Mohammad Rasheed Daoud, 26, Mohammad Omar Al-Qassam, 23, were killed during ensuing clashes with invading Israeli soldiers. While Rabee’ Baraka, 23, was killed in earlier clashes.

Several residents were injured as the army bombarded Khan Younis while the dozens of soldiers advanced into the area using armored vehicles.

Israeli military helicopters also fired a number of missiles and dozens of rounds of live ammunition.

The Brigades added that its fighters ambushed Israeli vehicles invading an area east of Khan Younis, and opened fire at them wounded five soldiers.

Israeli military sources said that the soldiers invaded the area to destroy a tunnel that was located two weeks ago, and came under heavy fire from Palestinian resistance fighters.

The army pushed more troops and tanks into the area, while several artillery shells were fired at armed resistance fighters who clashed with the invading soldiers.

Late on Thursday at night, five soldiers were injured, one seriously, by mortars fired by Palestinian fighters into the Eshkol settlement, across the border east of Khan Younis.

Different armed resistance groups in Gaza, including the Al-Qassam Brigades, said their fighters are ready for any possible larger Israeli invasion into the Gaza Strip, while hundreds of fighters were deployed close to border areas.

Palestinian security forces, run by the Hamas-led government in Gaza, are also on high alert, and are currently deployed in various border areas in the besieged coastal region.

Fighters further fired shells into the Kissufim Israeli military base, across the border east of Khan Younis, in addition to firing shells into a number of Israeli areas adjacent to the border.