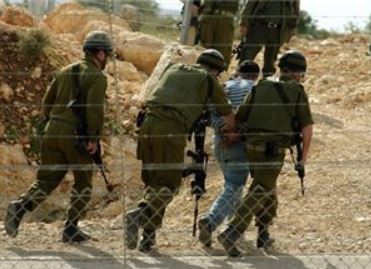 [Friday at dawn November 1, 2013] Dozens of Israeli military jeeps invaded Beta village, south of the northern West Bank city of Nablus, and kidnapped seven teenagers after breaking into their homes. One resident was kidnapped near Jenin.Local sources have reported that the soldiers broke into and searched dozens of homes, especially in the eastern area of the village.

The families of the kidnapped teenagers said that the soldiers violently broke into their homes and searched them causing excessive property damage.

The village is subject to frequent Israeli military invasions, while the soldiers repeatedly close its main entrance preventing the residents from entering or leaving it.

Local sources said that the invasion was carried out shortly after a number of youths hurled Molotov cocktails and stones at a settlement bus and military vehicles, driving near the Beta junction.

Clashes and invasions have been reported in different parts of the occupied West bank, especially after four Palestinians were killed by Israeli fire and shells in the Gaza Strip.